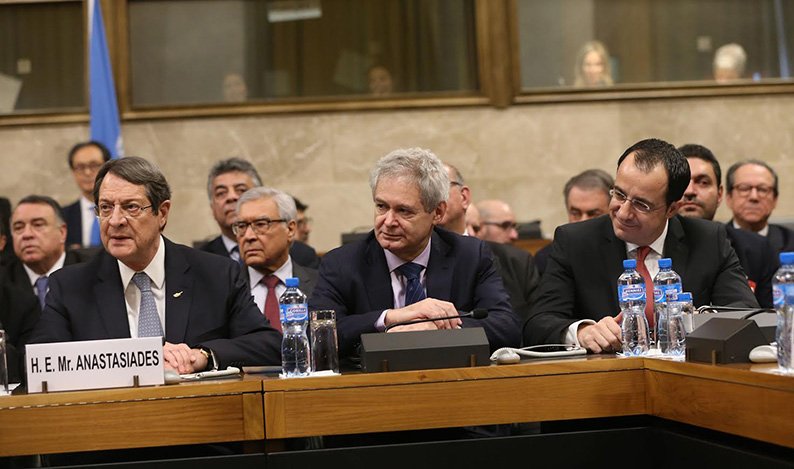 By Stefanos Evripidou in Geneva

THE historic Conference on Cyprus, launched yesterday in Geneva to discuss security and guarantees, ended last night without a deal but with a decision to continue discussions at a technical level next week, before re-convening at a political level again.

UN Secretary-General Antonio Guterres told Reuters he was confident that the participants were determined to make a “last effort” to find a solution.

There was no precise date set for the foreign ministers of the three guarantor powers of the process – Greece, Turkey and Britain – to meet again.

It was not immediately clear why Friday’s morning session was not to take place but UN Special Adviser Espen Barth Eide, and President Nicos Anastasiades are both due to give news conferences this morning.

According to an announcement released in the early hours by the UN which hosted the Conference, the participants (foreign ministers of Turkey, Greece and the UK, President Nicos Anastasiades, Turkish Cypriot leader Mustafa Akinci, and the EU as observer), agreed to establish a working group at a technocratic level.

The group of “deputies” will commence work next week, on January 18, tasked with identifying specific questions and the instruments needed to address them. Once the technocrats have completed their task, the Conference on Cyprus will reconvene at a political level immediately after to review the outcome of the working group’s discussions.

At the same time, negotiations on outstanding issues in the other chapters on internal aspects of a solution will continue between the two sides in Cyprus.

“The Conference confirmed the full commitment of the three guarantor powers to support reaching a comprehensive settlement,” said the announcement.

The Conference further commended the two Cypriot leaders “for the remarkable progress made over the past 20 months in the Cyprus talks”. According to the released statement, it was “only thanks to their dedicated work that it was possible to convene the Conference” in Geneva, marking first time that the guarantor powers and two sides in Cyprus were brought together to discuss the security and guarantees under the chairmanship of UN Secretary-General Antonio Guterres.

The statement went on to say that yesterday’s discussions underscored the participants’ intention to find mutually acceptable solutions that address the concerns of both communities. The participants “recognised that the security of one community cannot come at the expense of the security of the other”.

At the same time, they acknowledged the need to address the traditional security concerns of the two communities while also developing a security vision for a future united federal Cyprus, said the statement.

The participants recognised this was the time to bring the negotiations to a successful conclusion and that this “historic opportunity” should not be missed.

Speaking after the conclusion of the conference, government spokesman Nicos Christodoulides said the goal of the working group would be to discuss more specifically and thoroughly the issue of security and guarantees, the concerns and approaches that exist.

Once the positions, concerns and objectives of all sides are recorded, and specific questions formulated, the Conference will reconvene at the same political level as yesterday. The Greek Cypriot side/Republic of Cyprus will be represented in the working group by Andreas Mavroyiannis.

The group is expected to work three, four days on its task.

According to Christodoulides, in essence, Anastasiades’ proposal on security and guarantees provided to a considerable degree, the basis of discussions throughout yesterday.

“The conference on Cyprus which started today will continue at the level of the technocrats on Jan. 18 to discuss the issue, more specifically the issue of security and guarantees, the concerns which exist and the (various) approaches and when the results are known there will be a continuation of the Cyprus conference with the same composition we had today,” said Christodoulides.

Throughout the day, bilateral and multilateral meetings were held continuously on the sidelines of the conference.

During the afternoon session, according to sources, Turkish Foreign Minister Mevlut Cavusoglu and European Commission President Jean-Claude Juncker locked horns at one point.

Cavusoglu was reportedly talking about the EU, how much say it appears to have even though Turkey not a member and the Turkish Cypriots were not part of the bloc, while other member states were leaving the Union, to which everyone laughed.

Juncker reportedly got angry, switched on his microphone and said something along the lines of, “when you need money, you’ll remember us”, then switched off the microphone.

Cavusoglu was incensed, saying this was unacceptable, “you pledged three billion euros for Syria and haven’t even paid us yet,” he reportedly responded.