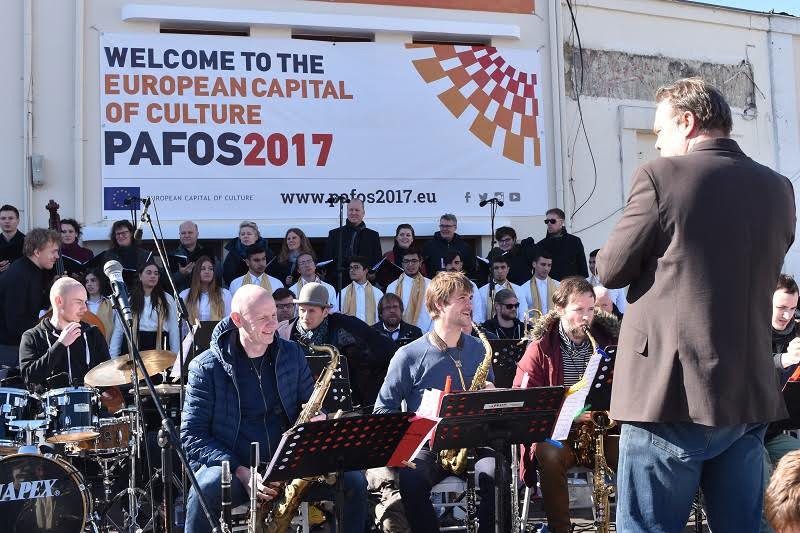 CELEBRATIONS to mark the official opening of Pafos2017 got underway in the town on Saturday ahead of the main event later in the evening.

A number of free events are being held in Paphos over the weekend to mark the occasion.

Excitement is mounting in the town and the buoyant mood was further lifted by a superb performance from the Aarhus Jazz Orchestra at Kennedy Square in the heart of Paphos old town which was scheduled to start at 12 noon.

Crowds gathered as the sun shone, braving a biting cold wind, to enjoy the hour long performance which also featured the Concert Clemens Choir and the Music Lyceum of Paphos Choir.

The musical offering got off to a late start due to a technical sound issue which was resolved during the performance, but which didn’t manage to dampen the spirits of the performers or the audience.

Aarhus and Paphos, the two European Capitals of Culture for 2017, will be connected throughout the year by a series of common projects and actions, of which this performance is the first.

The work of the internationally renowned Danish composer, Lars Møller, was composed specifically for the opening event of the European Capital of Culture – Aarhus2017.  He was in Paphos to present his work with the Aarhus Jazz Orchestra, the Concert Clemens Choir and the Music Lyceum of Paphos choir.

The Aarhus Jazz Orchestra is conducted by Lars Møller, the Concert Clemens Choir by an energetic conducted Carsten Seyer Hansen.
At the end of the concert, crowds were reminded to show their support and attend the main event later in Paphos which gets underway in the newly revamped town hall square at 7pm.

A walk around the city and the main venues of the Pafos2017 European Capital of Culture also got underway at 10am. Information points and volunteers provided information to the public.

Free parking for the weekend’s events will be available at a number of places including: Karavella, the new public parking behind the old police station, the 7th Elementary school stadium, Iakoveio Gymnastirio [Korinos] and underground parking at the government buildings.

Russia sanctions must be tied to progress on Ukraine peace, says Gabriel

Most allies have failed to rein in Turkey, president says