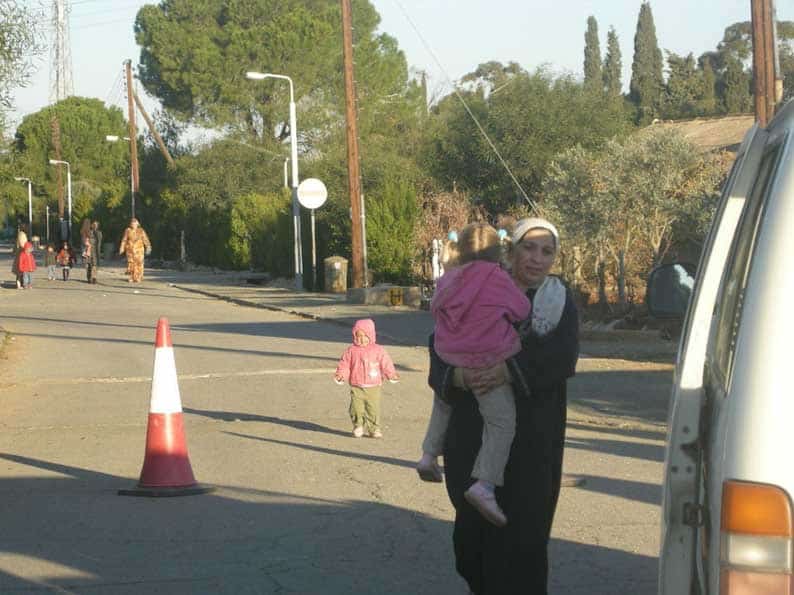 In a unanimous decision on Thursday, the UK Court of Appeals found British Prime Minister Theresa May had acted unlawfully in her capacity as home secretary in 2014 when refusing entry to a group of refugees stranded in the controversial Richmond Village at the Sovereign British Bases (SBA) in Cyprus since 1998.

A case marred by protests and complaints of living in terrible conditions, the court found it would be “unreasonable and a failure of the obligations to the refugees if resettlement (to the UK) was not achieved rapidly.”

It urged the current home secretary to re-evaluate the decision which has left them stranded at the Dhekelia bases for close to 20 years.

“There can be no justification for any future decision which leaves these claimants’ position unresolved for any further length of time,” it added.

The claimants in the case of R [Bashir & Others] v SSHD are the heads of six refugee families, who were amongst a group of 75 individuals who washed ashore on the SBA in October 1998, after the boat they were travelling in from Lebanon to Italy foundered off the Cypriot coast.

Following their arrival on the SBA, the six were detained for months. They were released just over a year later after being recognised as refugees under the 1951 Refugee Convention following a procedure conducted in conjunction with the Home Office and the UN Refugee Agency (UNHCR).

For the last 18 years the six refugee claimants and their nineteen children have had to endure deteriorating living conditions on the SBA where they are housed in ex-military accommodation which was due to be demolished in 1997. Many of the children were born at the SBA and have spent their whole lives there.

The claimants have always maintained that the UK is legally responsible for them and owes them direct obligations under the Refugee Convention. They have argued that their rights as recognised refugees cannot be delivered in the SBA and that the only durable solution for them and their families is resettlement in the UK.

However, the UK government has consistently denied legal responsibility for the claimants and their families, arguing instead that the refugee convention was never extended to the SBA and that the families have no grounds on which to seek resettlement in the UK.

The decision in November 2014 by May who was then the home secretary found the refugee convention did not apply to the SBA as a matter of public international law.

When the case went to the High Court however two years later, it ruled that the UK and the SBA were required to act within the spirit of the refugee convention because they adopted a policy to do so from the outset.

As such, the United Kingdom owes direct obligations to the six refugee claimants by operation of public international law, court heard, while noting the UK has “ample resources” to fulfil its responsibilities under the Refugee Convention and thus requires the current Home Secretary, Amber Rudd, to reconsider whether to give the Claimants entry to the UK.

Refugee Tag Bashir who is the lead claimant on the case, said “we are delighted that the Court of Appeal has found in our favour and confirmed what we have always known: that we are the responsibility of the UK government.

“For the last eighteen years the UK government has sought to ignore us and has left us stranded on the SBA living in awful conditions. All we have ever wanted is an opportunity to work and make a future for our children. We hope that the Home Secretary will now allow us entry to the UK. We will keep fighting until she does.”

Tessa Gregory, a partner from the human rights team at Leigh Day who is representing the refugees said “our clients have been in legal limbo for 18 years living in wholly unacceptable conditions on a British military base. They have suffered enough. Now is the time for the government to show compassion and a ‘strong and stable’ resolve to address this situation which has festered for far too long. We hope the UK government will not seek to pursue further costly legal proceedings and will face up to its responsibilities by allowing this small group of recognised refugees entry to the UK.”

When the migrants had arrived in 1998, the bases had tried to pass the responsibility of the migrants onto the Cypriot authorities which refused, saying they were on British soil.

Before Cyprus joined the EU however, it signed a memorandum of understanding with Britain to take responsibility for any asylum seekers who might enter the British bases through Cypriot territory.

As it is, had the refugees been allowed to move to the UK, it would not have set a precedent for future asylum seekers arriving at the bases.

In an interview with the Sunday Mail two years ago, one of the migrants that lives in Richmond village Layali Ibrahim, who was actually born on the boat fleeing Lebanon, said her birth certificate, issued when she was about 14 by the SBA administration, states that she was born “off the coast of Akrotiri.”

The same report cited a psychological evaluation of the Richmond villagers conducted for the UNHCR which found that most feel “depressed, hopeless and helpless” and many of the adults suffer sleeping and eating disorders brought on by anxiety over their unresolved status and their inability to “satisfy the basic needs of their children” who “feel they belong nowhere”.

Economic sentiment indicator rises in May