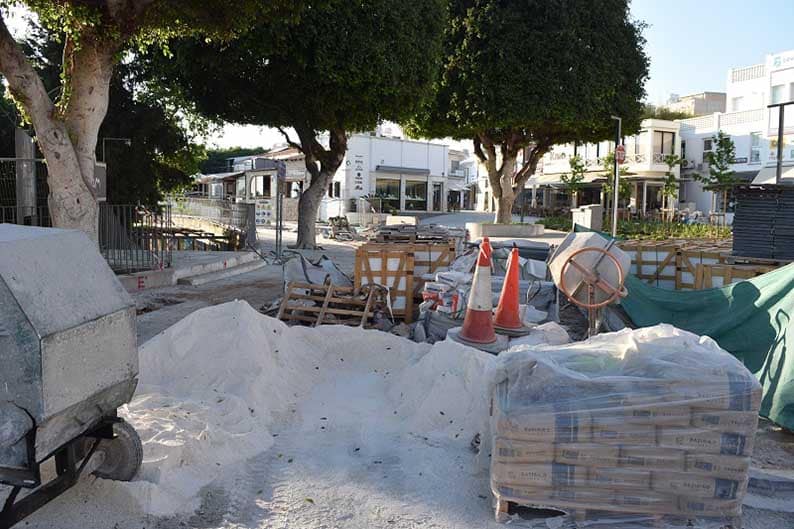 After months of dug up roads and seriously challenging obstacle courses for pedestrians, a new-look, renovated Paphos old town is slowly emerging, but more needs to be done to encourage investment in the area, locals say.

The works, which will see the regeneration of the old town (Ktima), has caused a massive upheaval to the entire central road network, with some remaining closed to traffic and many pedestrian areas hazardous to negotiate.

Head of the Friends of Paphos Old Town association, Kyriacos Kyriacou, who owns a handful of shops in Ktima, said this week that a lack of a master plan is discouraging would-be investors.

The upgrading works cover a huge area and when finally finished will greatly improve the centre of the town, but he said authorities must act now to encourage new businesses and quickly stamp out any illegalities which are already occurring.

“We are reverting to old ways and not treating the area as it should be. It’s as if we are destroying it before we have even started,” Kyriacou told the Sunday Mail.

He explained that a lack of a masterplan for the area means that those considering investing may be put off.

“There is no serious information or rules available on what is possible for the area. For example, if someone wants to open a taverna, how will it work? Are they allowed tables and chairs outside, how must they look and so on,” he said.

A spokesman for Paphos municipality confirmed that to the best of his knowledge, there is no overall plan for the area.

“Municipal decisions are made on individual subjects, such as traffic use, businesses and outdoor tables, for example,” he said.

Those wishing to open a business in the old town must visit the planning and technical department of Paphos municipality for information he said.

Christiana Mouzouri, whose family has operated a business in the covered market area for decades, said that the municipality should also have consulted owners and residents in the area before proceeding with any works.

“We spend so much time here and we know many things which they may not. Such as, which roads flood when it rains, for example?”

Ahead of the upgrading works, sections of the once vibrant centre had become desolate with shops and premises lying empty.

In 2015, €60 million worth of projects for Paphos, including the regeneration of the traditional shopping centre and Kennedy Square, the restoration of the municipal market, the upgrading of the Markideio theatre, and connecting and enhancing the squares of October 28, Kosti Palama and Dionysios Solomos around the town hall were announced by the president.

Although many of the areas now look finished, Kyriacou said that this is deceptive, as most, with the exception of Kennedy Square, remain unfinished and have yet to be completed and ‘delivered’ to the municipality.

“Concrete barriers are still in place and there are no cleaning trucks doing rounds as it’s not finished yet,” he said. “Also, motorbikes are whizzing up pedestrian only roads.”

Mouzouri said that owners of market shops are concerned that a decision to remove the cover over the central market walkway will be disastrous if something suitable is not put in its place, and which fits in with the area.

“I agree that the present covering is ugly and it is also old. But one idea of putting up bamboo to give shade would be a terrible, as we already have so many rats and mice on the rooftops. They would eat it and make nests there too.”

She added that more shade is needed along Makarios Avenue, as sapling trees planted there are young and will take time to grow before creating any shade and some have had to be replaced after vandals cut them down.

She urged Paphos mayor, Phedonas Phedonos and the council members to visit the area and consult with locals.

Another business owner, who did not wish to be named, said even fewer people than last year were visible on Makarios Avenue, the town’s main shopping street.

“We can’t survive much longer, I have to take financial help from my family otherwise I will close,” he said.

One of the main problems, according to Mouzouri, is that the main road of Aproditi and Fellachoglou Street, which provides a road around the market and was previously a busy drop off point for buses, has been closed for months.

The lift which brings people up from the car park below is also still broken and out of service.

“Nobody can tell me when the elevator will be fixed, or when the road will open. The closed market was supposed to be delivered at the end of May,” she said. “We are happy about the changes in the city, but things are difficult for us and we need more information as to when works are being carried out, what they involve and how long they will take.”

But she has nothing but praise for the contractor installing pavements close to her shop, describing him as very professional and attentive to details.

“I am sure that the area will be wonderful when it’s finished. But I don’t know how many of us can survive. One shop has temporarily closed while the owner works in a hotel for the summer.”

She said that most have had these shops all of their lives, as their parents did before them.

“This is our whole life and we need to know what’s ahead,” said Mouzouri.

According to a municipality spokesman, the central areas of Paphos will be completed by July 15, and the Makedeio theatre in September or October.

More funds for fruit and veg in schools

FM heads to Brussels for EU meeting on Turkey

Teenager and his grandmother remain critical after traffic accident