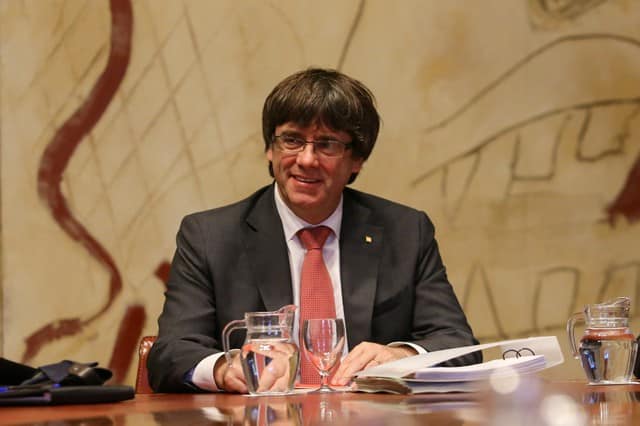 Catalan leader Carles Puigdemont kept friends and foes guessing on Wednesday on whether he intends to unilaterally declare independence as the Spanish government prepares to impose direct rule to stop the region breaking away.

Puigdemont spurned an invitation to explain his position to the Senate in Madrid on Thursday – an indication of the rigid stands taken by both sides in Spain’s gravest political crisis since the end of the Franco dictatorship in 1975.

He also kept his silence on whether to call for a new regional election, a move which might prompt the Madrid government to postpone its plan to take over Catalonia’s institutions and police.

The next few days could prove crucial in the battle of wills that has followed an independence referendum on Oct 1, which Madrid declared illegal and the Catalan government said endorsed its claim to statehood.

While it is not clear how the central government will take over in practical terms, nor how Catalan civil servants and police will react, some independence supporters have threatened a campaign of civil disobedience, raising the possibility of ugly confrontations.

The Catalan secessionist drive is the most serious existential challenge to a Western European country since the Scottish independence referendum in 2014, when voters in the end decided to stay part of the United Kingdom.

It has caused deep resentment elsewhere in Spain, caused a flight of business from the wealthy region, and worried other European leaders who see it as fanning separatist sentiment elsewhere on the continent.

Madrid has rejected Puigdemont’s calls for dialogue to resolve the situation, saying he first must withdraw an ambiguous declaration of independence made earlier this month. But it did invite to him address the Senate on Thursday.

However, late on Wednesday the Catalan leader turned down the offer, a spokesman for the regional government said, on the grounds that Madrid had already announced its plans to impose direct control on the autonomous region.

The Senate is expected to give the green light for that on Friday morning.

It was still unclear if Puigdemont would make a unilateral declaration of independence, which, given the opposition from the Madrid government as well as European leaders, would be merely symbolic.

Also up in the air was whether he would call a snap regional election, something a senior Catalan politician said on Tuesday was being considered. He could still do this on Friday before the Senate strips him of his powers and imposes direct rule.

Some Spanish political and business leaders, along with most Catalan newspapers, have backed the idea as a snap election could forestall direct rule and help break the deadlock.

Calling an election could also either strengthen Puigdemont’s mandate if pro-independence parties won, or allow him a graceful exit if they did not.

An opinion poll published by the El Periodico newspaper on Sunday showed a snap election would probably have results similar to the last ballot, in 2015, when a coalition of pro-independence parties formed a minority government.

The actual steps to enforce direct rule could be taken gradually in order not to inflame the situation. Catalonia said on Monday it was confident its officials, including the police, would defy attempts by Madrid to take over institutions.

Analyst Antonio Barroso of Teneo Intelligence said Puigdemont was caught between radicals and moderates in the Catalan establishment.

Radical elements want him to make the Catalan parliament declare independence unilaterally on Thursday or Friday. This would provoke a tough government reaction, playing into their hands, he said.

More moderate voices have said that if he calls an early election, he could stop the imposition of direct rule.

“Both sides are engaged in a game to tag each other with the blame for what happens next,” Barroso said.