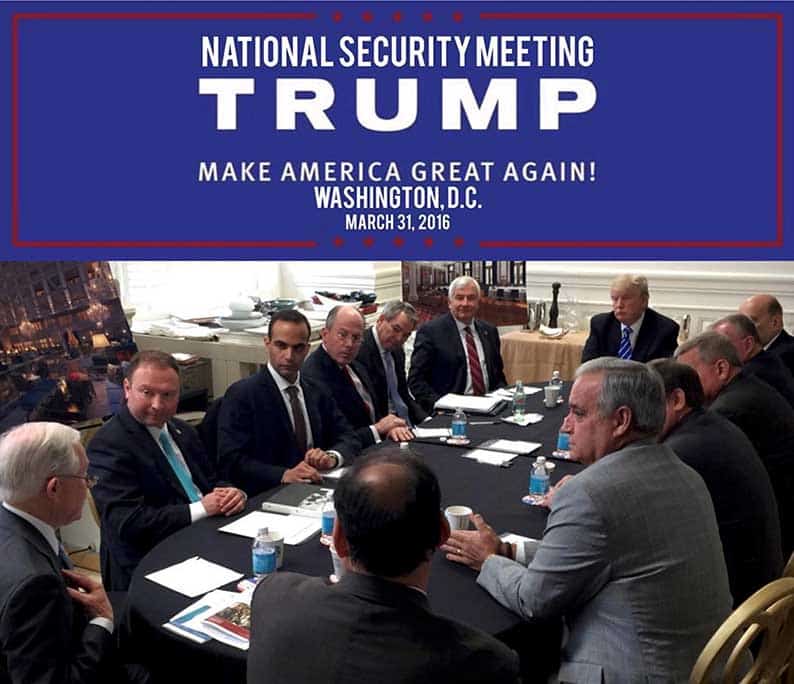 George Papadopoulos, the former Donald Trump aide indicted for lying to the FBI about the timing of his contacts with Russian nationals, in all likelihood did not possess the skills to engage in political machinations including those ostensibly in the interests of Cyprus, a person who knew him has told the Sunday Mail.

There’s a popular saying in Greek that goes: “Ise oti dilosis” which means you are whatever/whoever you say you are. It’s a put-down on people who impart an inflated sense of themselves but also on Greek society for tolerating this behaviour. The adage fits like a glove for Papadopoulos who claimed he could promote Greek and Greek Cypriot interests in the White House.

Little surprise, then, that a low-level operative for the Trump campaign was feted as a big shot by Greek Americans in the United States, wined and dined in Greece and here in Cyprus.

By March 2016 the young man had somehow finagled his way into candidate Trump’s foreign policy advisory team, by talking up his bona fides as an energy and oil consultant.

Papadopoulos, a high-flyer graduate of DePaul University, landed the job of top energy advisor on the Trump team.

It didn’t last long. By July Trump’s people, realising Papadopoulos was out of his depth, brought in Harold Hamm, a well-known oil and gas entrepreneur.

Papadopoulos was relegated to a junior role.

A Cypriot source, who knew Papadopoulos and met him on more than one occasion, tells the Mail that the young man had “very limited knowledge” of the oil and gas industry even as he was supposedly promoting energy relations between Israel, Greece and Cyprus.

“What’s being said in the press about him is pretty accurate. He gave an inflated picture of himself.”

The source, who declined to be named, speculates that a demoted Papadopoulos in desperation redoubled his efforts to make a name for himself as a Trump acolyte – which is what may ultimately have got him into trouble.

“He didn’t possess the sophistication for the political scheming he’s now being accused of. But I’ll bet that when he was first questioned by the FBI he played up his contacts with Russian officials, because that’s the kind of person he is. It backfired on him.”

Even the anti-Trump media acknowledges that Papadopoulos, 30, was punching above his weight. The Washington Post notes for example, that “If Trump or his team had undertaken even a cursory vetting of Papadopoulos, they would have found that much of his already-slim résumé was either exaggerated or false.

“Papadopoulos had scant experience that qualified him to advise a presidential candidate. He had entered the Trump campaign after a six-week stint working for the campaign of Trump’s rival for the Republican nomination, neurosurgeon Ben Carson.

“Carson’s campaign manager recalled that Papadopoulos was hired after sending him an unsolicited message via LinkedIn seeking a job.”

Others, too, were not taken in by this fabulist from Chicago. The Brits were quick to flag Papadopoulos as a lightweight.

According to the Washington Post, Papadopoulos approached British government officials to say he was travelling to London and asked to be given a meeting with senior government ministers.

“During the meeting, Papadopoulos made a comment indicating he had contacts at the senior level of the Russian government, British sources said. British officials quickly concluded he was not a major or knowledgeable player in the Trump orbit and did not pursue the issue or continue contact.”

Seasoned Greek reporter Alexis Papachelas seems to have sussed out Papadopoulos when they met for an interview in Athens in May 2016.

In an article published a few days ago, Papachelas writes of Papadopoulos: “His manner was that of a second-rate actor in a political thriller. Every so often, he would lower his voice so as not to be overheard or drop hints of major contacts, mainly in Israel, but also in Egypt and Cyprus. He also insinuated having some kind of close connection to the Israeli energy firm Noble.”

The reporter goes on: “I left that first meeting unsure of who I was dealing with or, rather, whether I was looking at someone who was too green or too flippant for the job he had been assigned.”

The Mail contacted Noble Energy to ask about Papadopoulos’ claim that he was “close” to the company.

In an emailed response, Noble Energy said: “We do not now, and never have had, a business relationship with Mr Papadopoulos. We did meet to brief him about our operations while he was at the Hudson Institute and in his capacity as a campaign advisor.”

But whereas some were sceptical of Papadopoulos political pedigree, the Greek-American community – harbouring delusions of having ‘one of their own’ in the White House – gobbled up Papadopoulos’ alleged credentials, treating him like a VIP and a conduit to the future US President.

According to Greece’s Kathimerini newspaper, two days before the US elections Papadopoulos attended an event in Astoria, New York, organised by Pseka, the International Co-ordinating Committee Justice for Cyprus.

“Mr Trump thought it important that I come here and talk with you,” he informed the audience.

Papadopoulos went on to speak of his contacts in Greece, Cyprus and Israel, posing as a broker of sorts.

He then promised that, as an advisor to Trump, he would do everything in his power so that “the next President can learn these matters inside out, that we may see better relations between Greece and America.”

Like the Greeks, Cypriots got all worked up about Papadopoulos.

He came to the island three times, at the invitation of the Press and Information Office. On his third visit, November 2016, daily Phileleftheros ran a major interview with him.

A perhaps awestruck interviewer treated Papadopoulos like an authority on all things under the sun, and the Greek-American happily obliged: he opined on Greek-US relations, Cyprus-US relations, the tripartite energy collaboration between Greece, Israel and Cyprus and, sure enough, he gave his two cents about Isis.

Papadopoulos’ tale took a dark turn. Shortly after his appointment as a foreign policy aide for the Trump campaign in March 2016, he was approached by a London-based academic who he and the FBI believe has top level contacts with the Russian government.

The academic is said to have introduced Papadopoulos to various well-connected Russians and to a Russian woman who Papadopoulos appears to have believed was President Putin’s niece.

Ostensibly, the purpose was to dig up ‘dirt’ on Hillary Clinton – nothing illegal about that.

It turns out the Russian woman was not Putin’s niece.

According to The Duran news website, Papadopoulos may have fallen victim to a sting operation. It’s possible the ambitious operator was being “set up by someone to prove a connection between the Russians and the Trump campaign.”

Lending credence to the theory are parallels between Papadopoulos’ contacts with the ‘fake niece’ in London and a meeting that took place between Donald Trump Junior and Russian lawyer Natalia Veselnitskaya.

The Duran again: “In both cases there was talk of the Russians possessing ‘dirt’ on Hillary Clinton with (apparently) an implicit offer by the Russians to pass this on to the Trump campaign. In both cases false information was provided about individuals who were allegedly part of the Russian power structure and who were involved in the discussions.

“In the case of the Donald Trump Junior/Natalia Veselnitskaya meeting the individual whose identity was misrepresented was Natalia Veselnitskkaya who was falsely alleged to be a ‘Russian government attorney’ acting for a non-existent official called the ‘Crown Prosecutor of Russia’.”

A poseur like Papapopoulos, in way over his head but eager to advance up the food chain, would make the perfect target for a trap.

The Americans have a saying: if you play with matches you get burned.

Tales from the Coffeeshop: Exam fuss hides a genuine travesty