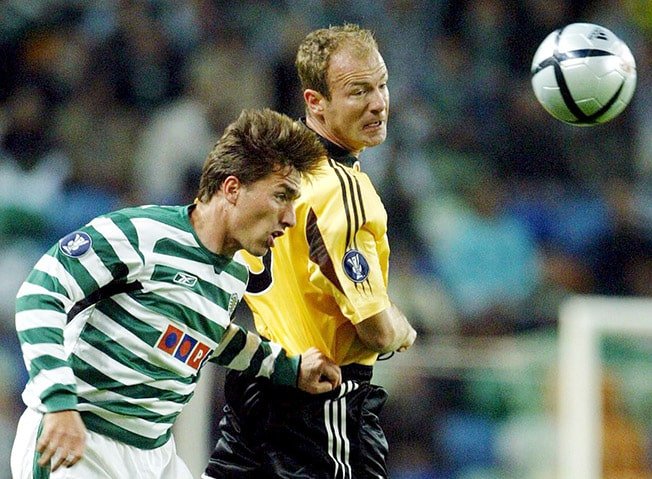 A BBC documentary presented by former England captain Alan Shearer (right) this month highlighted the case of Jeff Astle, who died aged 59 in 2002

An English study into whether heading a football can cause brain trauma will begin in January, investigating an issue that has been widely debated since the activity was blamed for contributing to a former star striker’s dementia.

A BBC documentary presented by former England captain Alan Shearer this month highlighted the case of Jeff Astle, who died aged 59 in 2002.

An inquest found that repeatedly heading a heavy leather football during his career was a factor in former West Bromwich Albion and England player Astle’s dementia.

The study, which will involve some 15,000 former professional footballers, was announced on Thursday by the English Football Association.

Dr William Stewart, who provided medical evidence in the investigation into the circumstances surrounding Astle’s death, will lead the study entitled ‘Football’s Influence on Lifelong Health and Dementia Risk’ (FIELD).

“Following two years of research and development, the FA and the Professional Footballers’ Association (PFA) have now confirmed the next step in their commitment to commissioning an evidence-based study into the long-term effects of participation in football,” the FA said in a statement.

The FIELD study will look at a range of physical and mental health outcomes, including neurodegenerative disease, in ex-professionals and compare results to matched general population health data.

“In the past decade there have been growing concerns around perceived increased risk of dementia through participation in contact sports. However, research data to support and quantify this risk have been lacking,” Dr Stewart said.

“Through the FIELD study we hope to be able to provide some understanding of the long-term health impact of football within the next two to three years.”

The FA’s CEO Martin Glenn welcomed the research saying it would be one of the “most comprehensive” ever into the long-term health of former footballers.

“Dementia can have a devastating effect and, as the governing body of English football, we felt compelled to commission a significant new study in order to fully understand if there are potential risks associated with playing the game.”

PFA chief executive Gordon Taylor has supported calls for a ban on children under 11 heading the ball until potential health risks are better understood.

Such a ban is already in force in the US

“I would agree with that,” Taylor said recently. “Heading is really being practised less and less when you see the way the game has changed. In the 1950s and 1960s when they had the old balls, when they were soaked they were particularly heavy.”

Ryder Cup postponed due to coronavirus