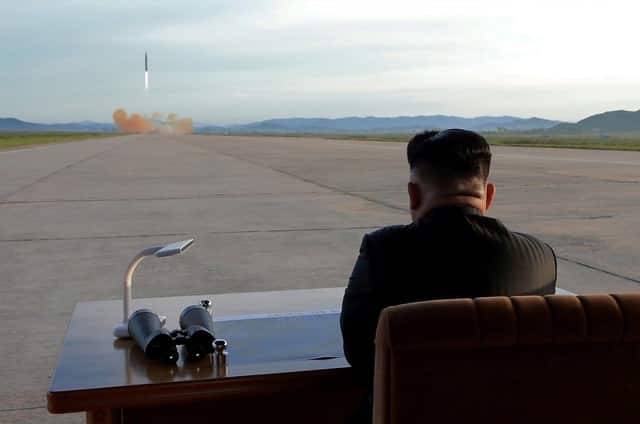 HERE we go again. Whenever North Korea launches a new long-range missile or does another nuclear test, President Trump condemns the test and warns Pyongyang not to do it again, while his generals and diplomats point out that it “threatens the entire world.” But latterly, the pattern has been evolving.

North Korea has carried out seven long-range missile tests and one underground nuclear explosion (its first hydrogen bomb) since Trump took office in January, and until August Trump’s language on these occasions was blood-curdling. In July, when two ballistic missiles were tested, he said that any further North Korean threats “will be met with fire and fury like the world has never see.”

That was actually a threat to attack North Korea with nuclear weapons: Trump was deliberately using the same language, even the same phrases that Harry Truman had chosen to use in a warning message to Japan just before an American plane dropped an atomic bomb on Hiroshima.

His defence secretary, General James “Mad Dog” Mattis, continued to talk in apocalyptic terms even after North Korea tested an H-bomb in September: “We are not looking to the total annihilation of a country, namely North Korea. But as I said, we have many options to do so.”

Maybe Mattis just didn’t get the memo, but Trump’s own response on that occasion was less dramatic, and even rather gnomic. Asked  whether he planned to attack North Korea, he only said “We’ll see.” That is the response of a poker-player, not the berserker he often pretends to be.

It was striking, even from the start of his presidency, that Trump has never made specific threats with details and deadlines, and his tone has continued to soften. After North Korea tested its first full-range ICBM this week, one that can reach any part of the United States, he just said “We will take care of it,” adding later that “It is a situation that we will handle.”

This suggests that he knows there is nothing he can usefully do to stop these tests, and that he will just have to live with a North Korean nuclear deterrent. He is clearly frustrated by it, and is often abusive about the North Korean leader – he called Kim “little rocket man” at the UN General Assembly in September – but he is now a long way from the “fire and fury” of July. Has someone been getting at him?

I suspect somebody has, and my leading candidates are the three generals who are now his closest advisers on this issue: Mattis at Defence, General H.R.McMaster, the National Security Adviser, and General John Kelly, Trump’s Chief of Staff.

In fact, I’m pretty sure it was mainly Kelly. The other two generals have been in their jobs practically since Trump entered the White House, and although I’m sure that they tried to talk sense to him about North Korea, it didn’t seem to be having much effect. Whereas Kelly only took up his job in late July (so the timing works), and since then he has had more face time with the president than anybody else.

At any rate, Trump is behaving as if he has finally been persuaded of the strategic realities by the generals who now surround him. None of them believes that a war in the Korean peninsula would be a good thing for the United States, and they will have been working hard to persuade the US president to accept that fact. It looks like they have succeeded.

Don’t expect Trump to go public and explain to Americans that there are no good military options available to the United States. He’s not going to tell them that they are ultimately going to have to live in a state of mutual deterrence with North Korea like they already do with Russia and China, because his default mode is sounding tough. But if he understands that himself, that’s enough.

Trump is ignorant and bombastic, but he is not stupid. If his generals tell him the facts often enough, he can be persuaded to behave with appropriate caution. He CANNOT be persuaded to tone down his rhetoric, especially the midnight tweets, so the sense of crisis will continue, but we may be safer than we think.

I would not be suggesting that Trump is privately willing to accept a rational accommodation with North Korea and live with their bombs and missiles if his evil twin, Steve Bannon, were still his Chief Strategic Adviser. To Bannon, ‘rational accommodationism’ is the worst crime of all. But that’s why Bannon’s resignation was one of General John Kelly’s conditions for taking the job of White House Chief of Staff.

Bannon is gone, and I think that Trump may now have secretly accepted reality. Of course, I could be wrong.

Our View: The generosity being shown with taxpayer’s money is scandalous

Hopefully the above information has clarified things for you. As it was previously mentioned, if you are not sure whether you want to allow the cookies or not, it is usually safer to leave cookies enabled in case it interacts with one of the features you use on our site. However, if you are still looking for more information, then feel free to contact us via email at [email protected]m