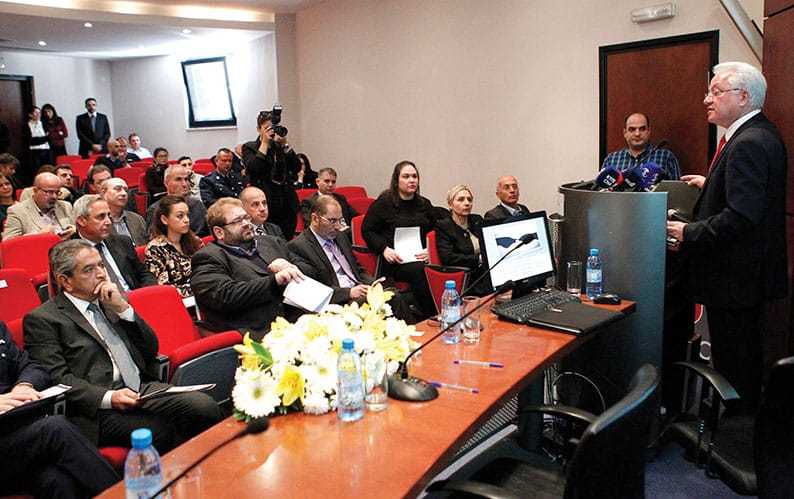 CYPRUS is seeing “unfathomable” levels of corruption and graft, despite the blows it has been dealt recently, both Attorney-general Costas Clerides and Auditor-general Odysseas Michaelides said at an event on combating corruption on Monday.

The event, organised by the justice ministry and the University of Nicosia, featured speeches by Justice Minister Ionas Nicolaou and the two independent officials.

All agreed that incidents of corruption can be seen at all times, both in Cyprus and abroad, and that combating the phenomenon requires a policy of zero tolerance.

Nicolaou said the number of cases of corruption investigated by police has doubled since 2014, and that the state is looking at consolidating 24 laws that touch on corruption offences into a unified piece of legislation.

Clerides said that, while corruption in the country has been dealt numerous serious blows, it continues to exist, not just in Cyprus, but in every state.

“Unfortunately, through money and self-interest, anything can be achieved,” he said.

“Ideas are guided, individuals and institutions are targeted, consciences are bought, crimes are committed.”

But such alarming and disappointing realisations must under no circumstances be allowed to undermine the task of combating corruption and graft, the AG said.

“On the contrary, they should comprise reasons for doubling down and further strengthening the resolve with which such incidents will be addressed,” he noted.

“The blows against corruption must continue and intensify. Only if the message that corruption crime does not pay, but instead is paid for, the situation may improve substantially.”

Taking the floor, Michaelides said the level of corruption is a lot higher than what he expected when he took over as auditor-general in 2014.

“I dare say that anyone who wished to abuse his position, could do so,” he said.

“He had ample opportunity and an almost complete assurance of non-punishment.”

The only ones who did not partake in corruption, he added, were those with a truly strict conscience, “those who had strong morals and values”.

One example of graft, he said, is the mud slung at the attorney-general “from particular media” in the last few days.

“One has to wonder how much lower some can sink, when they shamelessly preach about ethics and due process, having divorced ethics themselves,” Michaelides charged.

The Audit Service, he added, was plagued by incomplete checks.

“We had a mountain of checks that had not been completed for years,” he said.

“And let’s admit it: sometimes the service was being used as a tool to cover up, rather than expose, scandals. I am saddened to say it, but I can’t subscribe to a policy of offering immunity to every previous official, since that would blatantly clash with the principles of accountability.”

The prime driver of corruption is financial, the auditor-general said, citing specific examples.

“Recently, we looked at a former state official, now retired,” he said.

“He has no children and I wondered whether he thought he would take his ill-gotten gains with him to the grave. Then I found out he has a gambling addiction.”

In another instance, Michaelides said, “we were investigating the suspicious actions of a public official who managed large sums”.

“We suddenly got a tip that he has a drug addiction,” he said.

“We relayed the information to the drug squad and, after a time, we were told that our information had been correct.”

Five-star AEK back on top after thrashing Omonia