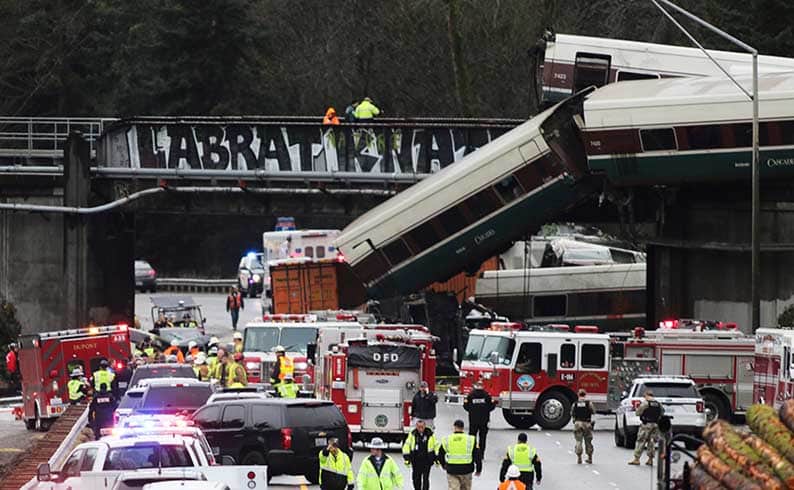 First responders are at the scene of an Amtrak passenger train which derailed and is hanging from a bridge over the interstate highway (I-5) in DuPont, Washington,

An Amtrak train derailed on Monday in Washington state on its inaugural run on a faster route from Seattle to Portland, Oregon, sending passenger cars tumbling from a bridge onto a major highway, killing a number of riders and injuring nearly 100.

The derailment caused “multiple fatalities,” Ed Troyer, a spokesman for the local sheriff’s office, told reporters at the scene, though he did not offer a specific number. The train struck several cars on Interstate 5, he added, causing injuries but no additional deaths.

Seventy-seven people were transported to hospitals in Pierce and Thurston counties, the Tacoma-based healthcare network CHI Franciscan Health said, including four “level red” patients with the most severe injuries. Another 20 patients were treated at the Madigan Army Medical Center in Tacoma, nine in “serious but stable” condition, the center said.

Four hours after the 7:40 a.m. (1540 GMT) crash in DuPont, Washington, several train cars remained dangling from the overpass, with others strewn across the roadway.

About 78 passengers and five crew members were aboard the train, Amtrak said in a statement.

“All of a sudden, we felt this rocking and creaking noise, and it felt like we were heading down a hill,” Karnes said. “The next thing we know, we’re being slammed into the front of our seats, windows are breaking, we stop, and there’s water gushing out of the train. People were screaming.”

The derailment occurred on the first day Amtrak trains began using the new inland route between the Washington cities of Tacoma and Olympia, part of a project to reduce travel time, according to an October news release from the state’s transportation department.

The rerouting takes trains along I-5, eliminating a major choke point for passenger trains in Tacoma and letting trains reach speeds of 79 miles per hour (127 km per hour), the department has said.

Monday’s southbound train, which was scheduled to depart Seattle at 6 a.m. (1400 GMT) for Portland, was the first to run along the new route, which uses tracks owned by a local commuter line.

It was not immediately clear whether the derailment, which came during a busy travel time one week before the Christmas holiday, was connected to the rerouting.

A statement from the state transportation department said the track had undergone “weeks of inspection and testing” before Monday’s launch.

A member of the train’s crew told an emergency dispatcher that the train came around a corner before the bridge and then “we went on the ground,” according to an audio recording posted by Broadcastify.com.

After the dispatcher asked whether everyone was OK, the crew member replied, “I am still figuring that out. We got cars everywhere and down onto the highway.” The dispatcher also asked for the driver’s location, and he responded, “As soon as I know exactly where all of my train is, I’ll let you know.”

The National Transportation Safety Board (NTSB) said it was sending a team of investigators to the site. Washington Governor Jay Inslee declared a state of emergency due to “loss of life, injuries and damage to infrastructure.”

U.S. President Donald Trump tweeted that the crash “shows more than ever why our soon to be submitted infrastructure plan must be approved quickly.” Trump has said he will unveil his long-delayed infrastructure proposal after Congress passes its tax bill.

The rerouting project was budgeted at $180.7 million and was funded by the Federal Railroad Administration, according to Washington State’s transportation department. The work was done by Sound Transit, which owns the track, and reviewed by the FRA, the department said on Monday.

Interstate 5 is the West Coast’s major north-south highway, running between the U.S-Mexican border in San Diego, California, and the border with Canada in Washington.

The mayor of one of the towns through which the rerouted trains travel warned earlier this month that the high-speed trains were dangerously close to cars and pedestrians.

“Come back when there is that accident, and try to justify not putting in those safety enhancements, or you can go back now and advocate for the money to do it, because this project was never needed and endangers our citizens,” Lakewood Mayor Don Anderson told transportation officials in early December, according to Seattle’s KOMO News.

The derailment was Amtrak’s second in Washington state this year. On July 2, a southbound train with more than 250 people aboard derailed in the town of Steilacoom, just a few miles north of Monday’s crash site. No serious injuries were reported.

In May 2015, an Amtrak train derailed in Philadelphia, killing eight people and injuring more than 200. The NTSB concluded the driver became distracted by radio transmissions and lost track of where he was.