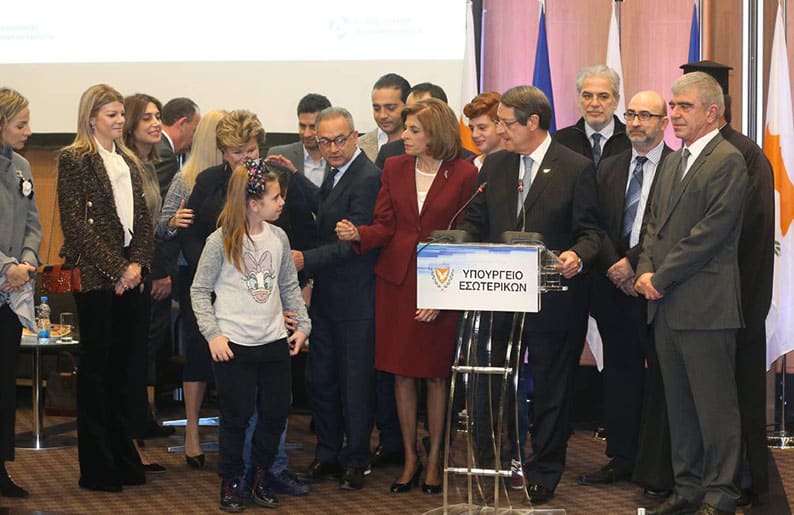 Nine presidential candidates on Friday pledged to reunite Cyprus and boost economic recovery, some taking sideswipes at the incumbent, Nicos Anastasiades, while calling for change.

Anastasiades was the last to register his candidacy during the parade of hopefuls at the Philoxenia conference centre in Nicosia. Each candidate for the January 28 round of the elections was proposed by one person and supported by another 100. A run-off election is set for February 4 if necessary.

In his comments after submitting his nomination, Anastasiades, whose attempt to reach a Cyprus solution crashed and burned in Switzerland last July, said the day after the election must find everyone united for the good of the country.

“What we have achieved to date was not accidental. It was the result of a collective action on the part of government, but primarily and above all through the cooperation and support of the trade unions and employers’ organisations, and above all through the sacrifices of our people.” He added that his vision for the next five years was of a “fully European country but especially a truly free and independent country”.

One of his main contenders in the presidential race, Stavros Malas, an independent backed by opposition Akel, said he would govern as the president of all Cypriots and asked voters for their trust.

His candidacy was proposed by former President George Vassiliou, who was himself an Akel backed independent who governed from 1988 to 1993.

Malas said that the next five years would be a period of major political decisions on the Cyprus problem, the economy “and the healing of wounds caused by the economic crisis, energy planning and combating corruption”.

He said his main concern was a rapid solution to the Cyprus problem. Prospects for the economy were also linked to this, he said.

Democratic Party (Diko) leader Nicholas Papadopoulos, who is backed by socialist Edek, the Green Party and the Solidarity Movement is standing on a platform for change.

“Together we are a massive social majority that wants to see an end to failed policies and that wants to restore dignity back to our people, who want to correct injustices, strengthen the social state, restore the middle class, to develop the Cypriot economy, to tackle conflict, corruption, to implement in practice a new strategy for the Republic of Cyprus, but also for efforts to resolve the Cyprus problem.”

Citizens` Alliance Movement President Yiorgos Lillikas, whose votes will be up for grabs in a second round most likely in return for a ministerial position, said his candidacy expresses an alternative policy, a new course for the Cyprus problem, the economy and social issues.

He called on those who believe in an assertive policy to curb Turkish intransigence and pave the way for a just settlement to support his candidacy.

“Our social obligation is to hand over a better Cyprus to our children, a state that will serve and respect its citizens, that will be effective and will function with transparency, giving equal opportunities to its citizens on the basis of meritocracy,” he said.

Another presidential hopeful Haris Aristidou said the aim of his bid was his opposition to “the bigoted, bizonal, bicommunal federation, with a wrong or right content”. He also said he supported the “right of self-determination” and expressed his opposition to drug lords and the police, which he described as “corrupt”.

He later filed five objections against the candidacies of Anastasiades, Papadopoulos, Malas, Lillikas and Christou which were all rejected.

Christakis Kapiliotis said his candidacy appealed to all the people of Cyprus, to Hellenism and even Turkish Cypriots. He said he was fed up of the continuing Turkish intransigence.

Wheelchair-bound Andreas Efstratiou said his candidacy was a bid to represent those on the margins of society. Efstratiou said the forthcoming elections were critical and referred to poverty and unemployment as well as the injustice that prevails in society. This is the tenth time he is running for election.

Michalis Mina, President of the Justice Party, strongly criticised the media, claiming journalists were involved in illegal activities and bribery. He also criticised political parties for spending more than a million euro in the pre-election campaign and bribing voters.

Our View: Our media and politicians persist in believing that Russia supports Nicosia on the Cyprus issue