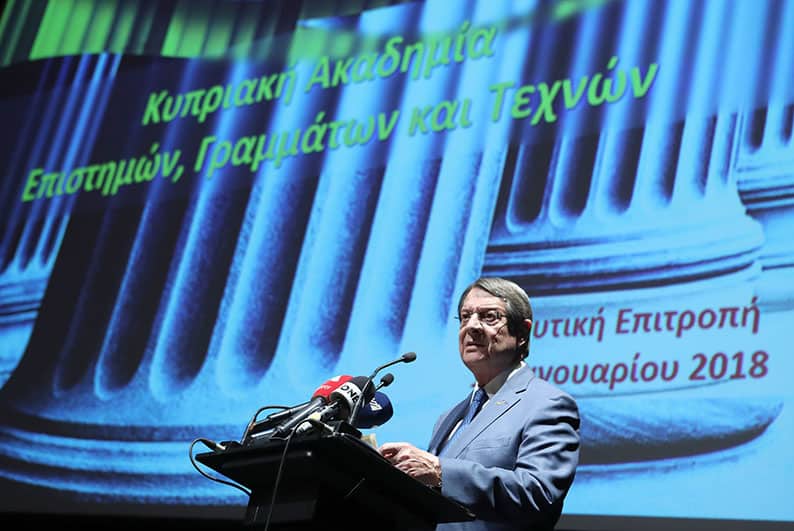 President Anastasiades, pictured at an event on Monday, said he would never attack Fotini Papadopoulos

President Nicos Anastasiades clarified on Monday that he meant no disrespect toward the mother and the family of his rival Nicolas Papadopoulos.

A day earlier, the incumbent drew the wrath of the Papadopoulos camp by bringing up Papadopoulos’ mother Fotini.

Taking aim at Papadopoulos’ own criticism of the administration’s alleged failure to resolve the problem of non-performing loans in the Cypriot banking system, the president said there are some problems that cannot be solved simply by throwing taxpayer money at them.

“I will not start promising a haircut on loans, like I hear some people saying, as if this comes from their mother’s money or the inheritance they received from someone,” Anastasiades had said, evidently alluding to Papadopoulos’ mother, known to be one of the wealthiest women in Cyprus.

Coming back on Monday, the president sought to put an end to the dust-up, insisting that his remarks were not intended as a personal attack but rather to make a point.

“I have only this to say: not only do I have respect for Ms Fotini Papadopoulou, but I also have the utmost appreciation of her and, more than that, I am grateful to the national benefactor, the late Leventis [her father].

“Why would I ever demean or attack Ms Papadopoulou or her contribution to society?”

Going on the offensive, the president then lambasted the Papadopoulos camp for deliberately twisting the meaning behind his remarks in order to score points with the electorate.

Unlike others, he added, he would refrain from using epithets against his political adversaries.

The mini-squabble gave main opposition Akel the chance to take the moral high ground and bemoan the lack of ethics in this election campaign.

On the campaign trail, party leader Andros Kyprianou said the personal attacks between Anastasiades and Papadopoulos are distracting from real issues.

Kyprianou said the president is never called out on the issue of widespread poverty in Cyprus.

“Mr Anastasiades is not asked to explain why, whereas he and his administration are portraying Cyprus as something akin to Switzerland, about one-third of the population is on the poverty threshold. For the last five years this government has turned its back on low-income pensioners, disabled persons and sick people.”

By the same token, Kyprianou went on, Diko’s Papadopoulos is not challenged on his real stance on the Cyprus problem.

And he suggested that the Anastasiades and Papadopoulos camps were both spending untold millions on their respective election campaigns, in a bid to “buy their way to victory”.

The previous week had seen independent candidate Giorgos Lillikas alleging that someone from a rival camp had tried to buy him out in exchange for him pulling out of the race.

Lillikas was soon forced to walk back his remarks when pressed to report the matter to authorities.

The latest poll carried out by Noverna and published on Sunday, gave Anastasiades 32 per cent while it showed Malas with 18.6 per cent, four percentage points ahead of Papadopoulos.

Betting agency Stoiximan is paying out 1.25:1 for Anastasiades to win re-election, 4.50:1 for Papadopoulos, and 7:1 for Stavros Malas, an independent candidate backed by Akel.

The odds on Elam’s Christos Christou to become president are 100:1; and adventurous punters would get 150:1 should dark horse Lillikas win the elections.

The agency is also offering odds on correctly predicting the two candidates making it to the runoff ballot.

Bets on the presidential elections are open until midnight of Saturday, January 20.

The first round of the elections takes place on January 28.

Meanwhile a gaffe by the Papadopoulos campaign staff last weekend gave rise to a moment of levity.

It appears that a trigger-happy staffer mistakenly dialled the Akel offices, soliciting support for Papadopoulos’ candidacy.

The Akel leader wasted no time trolling the Papadopoulos team.

He tweeted out: “Thank you @NicholasPapadop staff for calling the Akel offices to invite us to your planned gathering. We shall not be attending.”

Voters may find out which polling station to vote to at http://wtv.elections.moi.gov.cy/