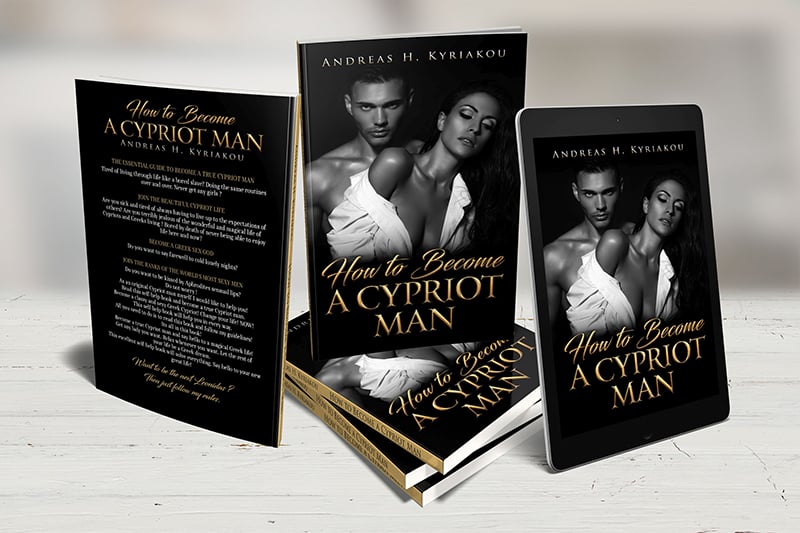 How to be a Cypriot Man relies heavily on repetition. Which might be rather annoying were it not a fairly familiar style: why say something once when constant reiteration lends such a delightfully informal Mediterranean edge?

This verbosity is, one feels, a large part of the book’s charm: the reader feels they’re being spoken to directly, possibly by Zorba the Greek (when the pronouncements hold a modicum of wisdom), at others (in passages of humorous absurdity) by Costas of Shirley Valentine fame. Either way, Norwegian-born author Andreas Kyriakou has captured the real ‘kamaki’ spirit in his prose, creating a protagonist who loves his wine, women and song. And though the entire thing is utterly tongue-in-cheek, you nevertheless warm to the passionate, repetitive stereotype he has conjured from the beaches of Napa, circa 1985…

“In this self-help book I will show you how to really become a Cypriot man. I will teach you simply. All the answers are in this book… Just follow my tips. I promise you it will solve your long-standing hunger to finally be a real Cypriot. You will not regret this. Thousands of girls will come knocking at your door. You will be the true Cypriot lover. I will fix everything for you. The rest of your life will be like an amazing Greek Cypriot dream. Cyp up your life!” it claims. Billed as ‘a humorous self-help book of sarcasm and romance’, Andreas describes How to be a Cypriot Man as “a funny, sarcastic but also sometimes serious self-help book, with added erotic fiction stories.” Clocking in at roughly 150 pages, and available both in print and online, the book is, Andreas adds, “about half serious, half humorous. I want the reader not only to be entertained by the fictional process of turning themselves into a true Cypriot man, but also to be educated about the Greek world.” To this end, the 16 chapters cover both amusement (‘Be A playboy’, ‘Family, Religion, and the Mafia’, and ‘Ten Warnings About Cypriot Women’) and more solemn subjects, including Greek music, an abbreviated history of the island, and a chapter on Limassol.

“Limassol is the city I’m from,” Andreas reveals, “and I love it. Although I was brought up in Oslo and still live there, I’m back in Limassol every summer. Norway,” he continues, “is so very different from Cyprus. It’s another planet, especially in terms of the weather. But despite my upbringing, I miss Cyprus all the time, and feel very proud of my heritage. I think, when you’re part of the diaspora, that heritage is even more important to you. And that was one of the reasons for writing the book…”

Drawing from a pool of inspiration which included the stories he heard from his uncle’s friends – “they spent the eighties on the beach chatting up Scandanavian girls! There’s a big part of the ‘kamaki’ element to the protagonist in this book,” he chuckles – the film My Big Fat Greek Wedding, and a host of stereotypes, Andreas managed to write the text within a year. “It wasn’t easy,” he grins. “There’s a fine line between comedy, seriousness, self-help, and marketability. Originally, I was going to call it ‘How to Become a Greek Man’, but ultimately decided to go with what I knew best. It’s more of a niche market as well, so hopefully that will help to endear it to those who have visited the island or know Cyprus well.”

“I just hope,” he laughs, “that people don’t take it too seriously! I mean, there’s a disclaimer at the start, so it’s pretty clear this is light-hearted read, not a true guide to transforming oneself; there may be mixed reactions, but you’re always going to get complaints and that’s fine. Basically, it’s aimed at an audience who know Cyprus, people who’ve come across the Greek Cypriot man before and will enjoy reading it tongue-in-cheek.”

As for the four erotic stories dotted throughout the text, Andreas is keen for feedback. “They’re kind of examples which illustrate the chapters,” he explains. “They’re different, quite unique in a way, but they certainly fit with the idea of this Cypriot playboy lifestyle: they lend the book an added facet and I’m looking forward to seeing how that plays out. I think it might quite appeal to a female audience. And in the same way, the book as a whole might well attract female readers who have dated or married a Cypriot man: I’ve always thought it’s important to be able to see the humour in every situation, and for anyone who’s ever had a problem in their relationship, this is going to be an entertaining read!”

Perhaps the most interesting thing about Cypriot Man is the difference between the protagonist and the author. Humble, polite and thoughtful, Andreas himself is a world away from the brash, tempestuous stereotype he’s created. “I’m the author, not the character,” he concludes with a smile. “Though I guess we do both share a pride in our heritage. Cypriot men are truly unique… And if you want to find out exactly why this is, you’re going to have to read the book!”

How to Become a Cypriot Man: Become a Greek Sex God by Andreas H Kyriakou is available on Amazon in both paperback (approx. €6) and on Kindle (approx. €2)

Tillerson visits new US embassy in London that Trump criticised

Boys and girls make some noise