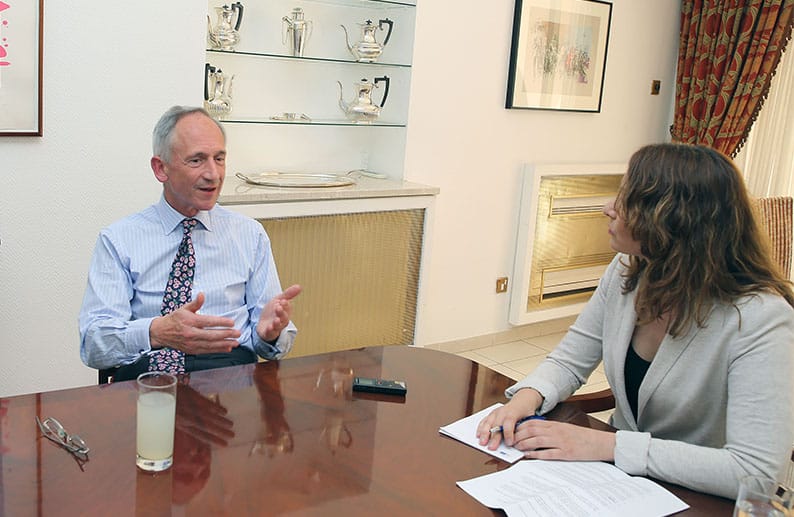 Matthew Kidd: the challenge of making progress gets harder and not easier

Whatever is going to happen with the resumption of Cyprus talks, should happen quickly, outgoing British High Commissioner in Nicosia, Mathew Kidd, said on Wednesday.

The challenge of making progress only gets harder, not easier, Kidd said in an interview with the Cyprus News Agency that also covered Brexit, hydrocarbons, and the British bases in the context of its role in carrying out air strikes on Syria last weekend.

On the Cyprus talks, Kidd said Britain, a guarantor power along with Greece and Turkey, was ready to be part of any new conference on Cyprus as it had been during the previous talks in Crans-Montana last year.

Commenting on the leaders’ dinner on Monday night, which was aimed at scoping out the possibility of resuming negotiations, Kidd said President Nicos Anastasiades and Turkish Cypriot leader Mustafa Akinci “seem to have agreed that they both want to use the idea of consultation missions by the UN to clarify the way forward which is good because it implies that they do both want there to be a way forward,” he said.

“I do think that it is important that whatever is going to happen should happen quickly because after such a long delay since last summer and with other things… the world is not waiting, the challenge of making progress gets harder and not easier. So the sooner… the better.”

Kidd said the UN chief’s framework for the talks going forward, which was put on the table in Crans-Montana, was “a really important piece of machinery” and described for the first time a way of bringing together and balancing outstanding issues.

“But exactly how it is used wasn’t ever discussed. So you cannot really say that there is a method of using it that was agreed in July and can be put into practice. It was a method, a concept, a very useful one, but there will still need to be a discussion, an agreement about how to use it, how to get from the very general way in which it was discussed in July into something that can lead directly into a completely ripe conclusion,” Kidd said.

Referring to the challenges posed by Turkey to Cyprus’ energy plan, which are also negatively affecting the negotiations, Kidd said what had happened in recent months had added to the mutual mistrust. Earlier in the year, Turkey blockaded an Italian drillship for two weeks inside Cyprus’ exclusive economic zone.

“Even without being directly part of the process and they [hydrocarbons] never have been, they now constitute part of the climate, part of the backdrop, within which any resumed process needs to take place,” he said. The Turkish Cypriot side wants the energy plans to be either put on the table or suspended. The Greek Cypriots have vowed to do neither.

“However that background of hydrocarbons is dealt with or left out of the process as it resumes, if it resumes, is part of what both sides, all the parties, will have in their minds from now on, and so it will need, in one way or the other, to be taken into account,” Kidd said.

If energy was ever going to be able to be a positive incentive, it could not be done while having no contact on the subject, he added.

On the use of the British bases to strike Syria, which caused some controversy locally, Kidd said: “We recognise that using the bases in the way that we did created a possibility which we need to take very seriously, of needing to protect this whole island if you like, or at least the parts of it, the bases and around the bases, and we do that, and we have told the government that we do that.”
When it came to Brexit, the High Commissioner said Cyprus was one of the two or three EU countries whose economy would be most directly affected “not necessarily badly affected but directly affected because of things like the tourism flow and links in the financial services sector and the people to people links,” he said.