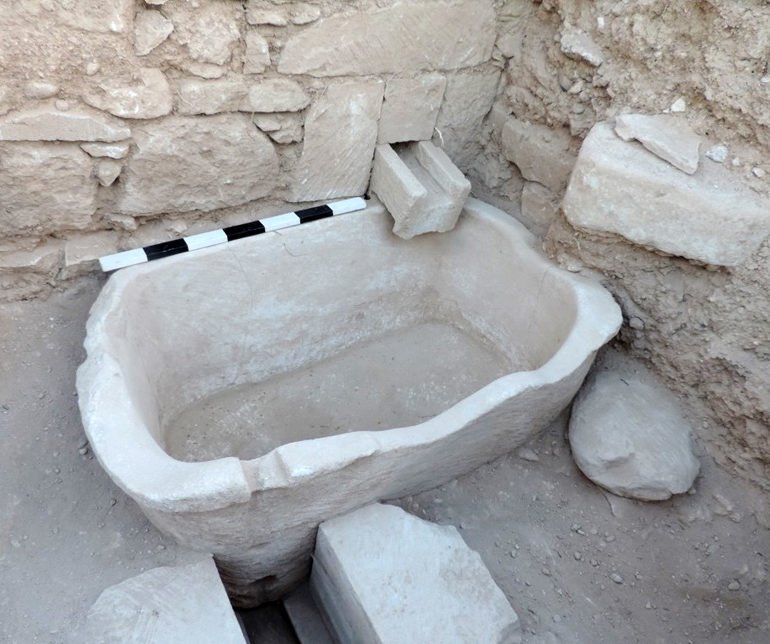 An ancient rampart with watchtowers and significant findings regarding the economy of ancient Paphos have been unearthed by University of Cyprus (UCy) archaeologists at the Kouklia site.

The UCy said the 2016 excavations had focused on the extended storage facility discovered on the northern side of what is known as the Hadjiaptoullas plateau and an adjacent large tomb at Laona.

The existence of both monuments had been completely unknown prior to the start of the programme that has been conducted in the broader Kouklia region since 2006, the UCy statement added.

The Hadjiaptoullas plateau, located about one kilometre to the east of the Aphrodite Sanctum, appears to have served as the palace of the royal dynasty that ruled Ancient Paphos until the end of the 4th century BC.

The discovered complex is stone-built, about 1.5 metres tall, and extends at least 65 metres in length, of which 54 metres have already been revealed.

“It also extends in parallel levels on the northern slope of the plateau and, it seems, the first level included a floor over the ground-floor rooms,” the statement said.

“Since 2016 and for the next two years, operations will focus on gathering and analysing sensitive ancient environmental data from labs and biotechnical facilities (mills, piping, etcetera) of the middle wing, which were ‘sealed’ under collapsed roofs.”

In introducing this methodological approach, the UCy struck up a partnership with researchers from the Wiener specialised lab of the American Classical Studies School in Athens.

With regard to the Laona tomb, the UCy said it is “extremely rare in the culture of ancient Cyprus” in terms of the materials used and the method of construction which confirm the mobilisation of large numbers of labourers.

“It is estimated that 9,888 cubic metres of material had to be transported to the site.”

The date of construction has been put at the 3rd century BC, and it is thought likely that it was built on instruction by the Ptolemaic dynasty, which ruled the Cypriot kingdoms at the start of this century.

However, the statement added, further investigation of the south-eastern quadrant of the tomb revealed an even earlier monument.

“It is a rampart running north-south, so far excavated to a length of 42.5 metres,” the university said.

“Two staircases facing each other, whose state of preservation is so far unparalleled, must have been leading to towers.”
“The ceramic material isolated in the foundation trench between the two staircases suggests that the rampart was constructed late in the 6th century BC, probably towards the end of the Cypro-Archaic period.”

Pope tells bishops to have zero tolerance for sexual abuse

Giants of the music scene