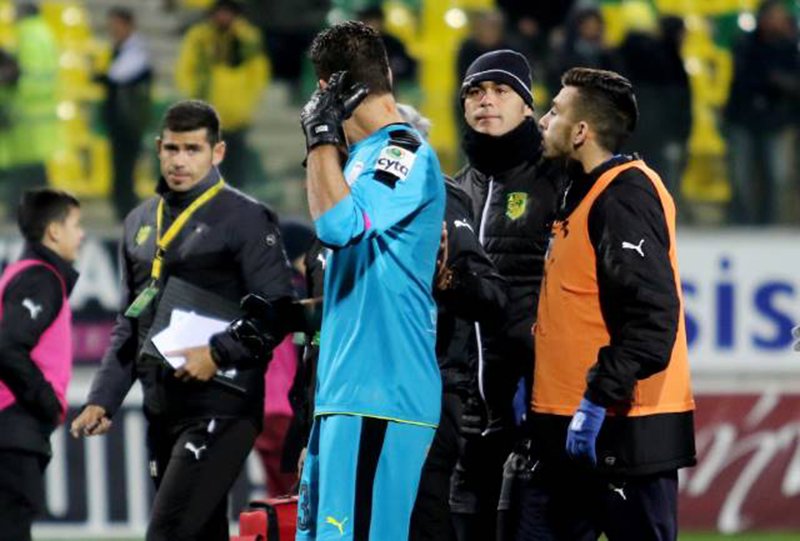 Bruno Vale, Apollon’s keeper feeling dazed after being hit by a flare

Apoel moved to the top of the table after a comfortable win against bottom-placed Anagennisi Dheryneias and AEK’s home 3-1 defeat to a resurgent Apollon.

An impressive Apollon, especially in the first 45 minutes, inflicted AEK’s first home defeat of the season on them in a game that was also marred by crowd violence.

The Limassol team raced into a three goal lead inside the first 23 minutes with Fotis Papoulis starting the goal scoring spree in the fifth minute.

Maglica doubled the score after AEK’s defender Katala conceded possession in a dangerous position with Alex da Silva getting the third from the penalty spot after Maglica was upended in the box.

AEK managed to pull one back before the break through Ivan Triscovski.

A couple of minutes from the break Apollon’s keeper Bruno Vale was hit by a flare hurled from the home fans’ stand. After receiving treatment he was able to continue.

In the second half AEK pushed forward to reduce further the deficit with Andre Alves going agonisingly wide in the 52nd minute.

However Apollon were always dangerous on the break with Gomes, Pedro and da Silva going close to adding a fourth goal.

The final whistle found Apollon celebrating a precious win that keeps them in the hunt for the championship.

Apoel, who had not won the first game of the new year in the past four seasons, registered an easy 4-2 win over bottom placed Annagenisi Dheryneias.

Apoel were dominant from the whistle and missed a host of chances before Stathis Aloneftis opened the score in the 10th minute. The Nicosia team’s dominance continued and seven minutes later Vinicius doubled the score with a close range header.

The half ended with the visitors missing more chances to increase the score.

In the second half Apoel stepped down a gear with bottom placed Anagennisi seeing more of the ball but with little forward penetration.

Vinicius added a third for Apoel with another close range effort in the 60th minute but two goals in the space of 90 seconds twenty minutes from time, first from Weslem and then from Brigito, gave the home side a fighting chance.

This though lasted just four minutes as Yiannis Giannotas fired Apoel’s fourth to seal the three points for the champions.

In Paphos, Anorthosis proved too strong for AEZ Zakakiou as they deservedly picked up the three points with a 2-0.

Pele gave Anorthosis the lead in the 5th minute with a cleverly taken free kick from 20 metres while Carlitos made sure of the points late on in the game after taking advantage of an error by AEZ goalkeeper Efthymiou.

In the final game of the day Nea Salamina moved into sixth place after defeating relegation threatened Aris 2-1 with last year’s top scorer Makriev netting the winner 13 minutes from the end.

Round 17 of the championship will be completed on Wednesday with three more fixtures.

At the GSP stadium Omonia take on Ethnikos Achnas while at the same time (5pm) Ermis Aradippou are at home to Doxa Katokopias. An hour later high flying AEL entertain first division novices Karmiotissa at the Tsirion stadium.