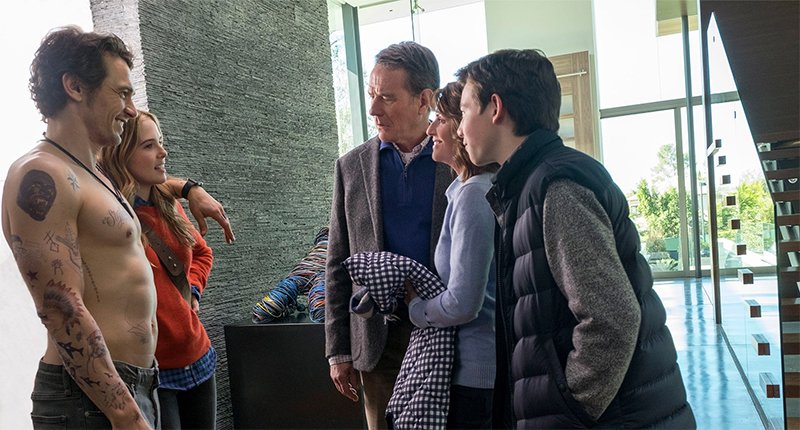 Michigan was one of those surprise Midwestern states that went for Donald Trump in this year’s US elections. That may seem irrelevant to a broad, raucous comedy with a cast of characters that includes a llama and a man viss a funny Cherman accent – and I guess it is, or at least you don’t have to think about politics (you don’t have to think at all) to enjoy Why Him?. Yet this silly movie has some Time-capsule value, with a glimpse of the social fault-lines at work in the US and elsewhere: “I think we come from two different worlds”.

Michigan is one such world, Silicon Valley is another. Ned Fleming (Bryan Cranston) is a middle-class paterfamilias whose printing factory is on the ropes, his customers shifting their business either online or to China; he and his two dozen employees face unemployment and bankruptcy, barring some “Christmas miracle”. Laird Mayhew (James Franco) is a 30-something tech billionaire with more money than sense, his swanky mansion doubling as an office where unhealthy-looking nerds sit around testing games and designing apps. Never the twain shall meet – at least till Ned and family travel from Michigan to California to spend Christmas with daughter Stephanie (Zoey Deutch) who, unbeknownst to them, has been living with Laird for months.

This is Meet the Parents with the roles reversed – not just because it’s the prospective in-laws having to stay in the boyfriend’s house (the mansion is big enough for everyone) but also, more radically, because the power dynamics have shifted. Ned is out-of-date and old-fashioned; he doesn’t even know the word “totes”, let alone “bukkake”. The world has been turned on its head. Greg Focker in Meet the Parents was a humble youngster bending the knee to success and power – but here Laird is rich and Ned is poor, the older man as forlorn as those disenchanted Trump voters while the younger one personifies the new American dream. Ned’s only card is emotional: Laird is a manchild who never had a daddy and he desperately wants to be friends, nor would he dream of proposing to Stephanie without her father’s blessing. When power is gone, all that’s left is symbolic power.

All the good jokes come from the clash of personalities: Laird is one of Franco’s most exuberant creations – coarse and immature but also generous, and honest to a fault – while Cranston gets the grumpy-dad wardrobe and awkward body language (he also gets a classic dad speech when laying out the downward spiral whereby a tattoo will lead his daughter, inexorably, to hard drugs and prostitution). All the not-so-good jokes come from an overlong comedy spinning its wheels with tiresome filler like toilet humour – the house is “paperless”, which you’d think someone would’ve told Ned before it was too late – and Adam Sandler leftovers like that man viss a funny Cherman accent. Laird’s world also includes an omniscient robot voice, an MIT-educated intern (whose job includes washing the aforementioned llama), trendy treats like “edible soil” and “deconstructed eggnog”, and a Damien Hirst-like sculpture of a dead moose suspended in its own urine. Clearly, this cannot end well.

Why Him? is basically junk – but it’s more amusing than it sounds, and more thought-provoking too. Laird, paradoxically, is a Trump figure: he’s super-rich, uninhibited, unconcerned with privacy, and has no filter. To be sure, he doesn’t stand for the same things. He’s Silicon Valley royalty, chummy with Bill and Melinda Gates who’ve got him “totally pumped” on Third World issues – but this year’s election (like a lot of elections) wasn’t really about the issues, it was about working men of a certain age feeling alienated and looking around for a charismatic benefactor (spoiler: Laird’s millions end up coming in handy at the climax). Anyone wanting to find political layers in a soft-centred Hollywood comedy – or just bored of watching Bryan Cranston sitting on a paperless Japanese toilet that also gives his wife a “vaginal cleanse” – could see an element of wishful thinking here, as if to say that Trump is potentially a template which the Left could use as well as the Right. There’s no reason why Silicon Valley can’t connect with Michigan, just because they speak different languages.

Meanwhile we have Why Him?, a lamely good-natured attempt to reach out to everyone, with its jokes about parents being unable to work computers side-by-side with jokes about toilets and jokes about Mum getting stoned and coming on to Dad (the target audience is presumably college students who are home for Christmas and decide to go to the movies with their little brothers and 40-something folks). Laird yells out a list of Netflix shows for no reason at all, Kiss (the band) turn up unexpectedly – but Ned also mentions Peter Sellers as Inspector Clouseau, and Laird doesn’t know what he’s talking about! I think they come from two different worlds.

The year in entertainment

TV shows we love: One of Us Is Lying

Review: The Return of Faraz Ali by Aamina Ahmad

Hold your head up with pride