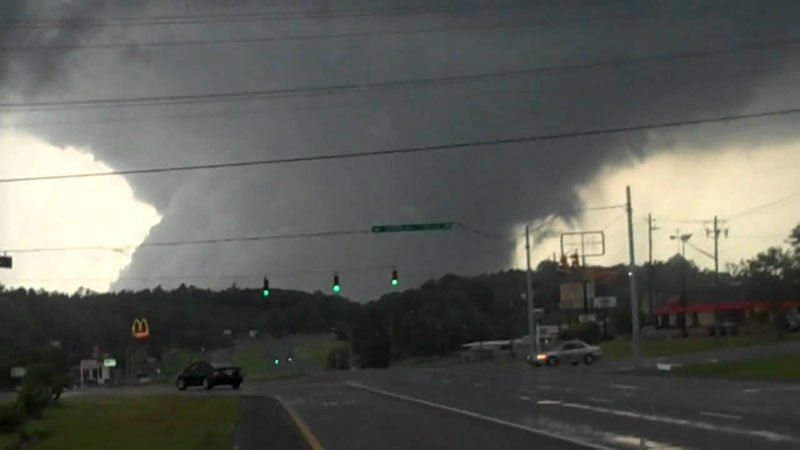 A tornado is believed to have killed four people in southeast Alabama on Monday, when winds sent a tree crashing onto a home as a heavy storm system pounded the U.S. South with rain, hail and strong winds, officials said.

The victims were in a mobile home in Rehobeth, just outside the city of Dothan, Houston County emergency management spokeswoman Kris Ware said in a telephone interview.

Authorities fighting to extricate three more people who were in the mobile home at the time expect them to survive, but emergency workers are trying to determine how badly they were hurt, she added.

“Prayers for those impacted today,” Alabama Governor Robert Bentley said in a message on social network Twitter, referring to the four deaths.

The National Weather Service has made a preliminary determination that a tornado struck the area, Storm Prediction Center meteorologist John Hart said by telephone.

Ware said officials believed the four mobile home deaths were due to a tornado, adding that the roofs and garages of other homes nearby also suffered damage.

Officials said they plan to make a full damage assessment on Tuesday.

The National Weather Service had a total of six preliminary reports of tornadoes touching down in Alabama and Mississippi on Monday, Hart said.

Except for Rehobeth, there were no reports of fatalities from the possible twisters, however.

Heavy rains brought by the storm system caused localized flooding in some parts of the U.S. South, officials said.

A 70-year-old man in the area of DeFuniak Springs in northwest Florida was found drowned on Monday following flooding there, the Walton County Sheriff’s Office said in a statement.

Sheriff’s deputies discovered the man facedown near his partially-submerged car, it added, but it was not immediately clear when he drowned.

The weather in the U.S. South was expected to improve on Tuesday, Hart said.

The storms had limited impact on air travel, with nearly 40 arriving and departing flights canceled at Houston Bush Intercontinental Airport, one of the country’s busiest, according to tracking firm flightaware.com.

Arriving at end of my coaching career, says Guardiola