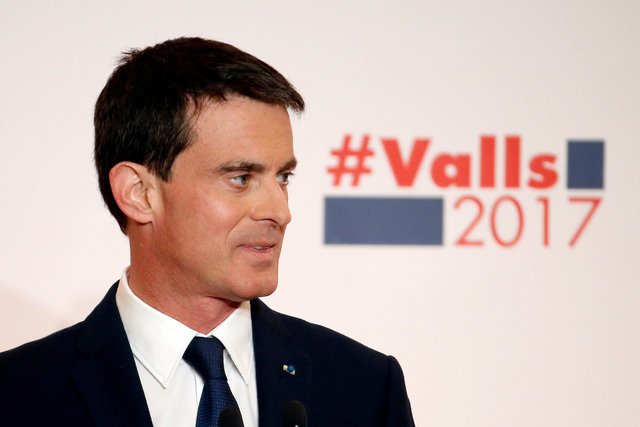 French politician and former Prime Minister Manuel Valls unveils his election platform to the media ahead of the left's presidential primaries in Paris, France, January 3, 2017

The man tipped to be the ruling Socialist Party’s candidate in France’s presidential election said on Tuesday he would avoid draconian public spending cuts planned by his front-running conservative opponent.

Manuel Valls, who resigned last month as prime minister, also proposed an overhaul of France’s welfare system that would provide substantial monthly handouts to many jobless people without requiring them to prove they are actively seeking work.

Valls, 54, told voters that they faced a “vast purge” in public services and employment if the presidential election favourite, right-winger Francois Fillon, won power in May.

While pollsters say Valls is likely to secure the Socialist ticket in a primary vote in late January, they also suggest that he or any Socialist will be knocked out of the presidential contest itself in the first round of a two-round ballot.

Although a moderate in his own camp, Valls played up the divide between the position of the broader left and Fillon’s promise of 100 billion euros in spending cuts plus 500,000 job cuts in the public sector.

“The right’s programme will punish the French people. It is an unbeatable recipe of division worse than this country has ever seen in recent decades,” he told a new conference where he presented his programme.

Fillon says big spending cuts are needed give corporate France a shot in the arm and boost economic growth.

Valls said France under his rule would respect a European Union-wide objective of keeping the public-sector deficit below 3 percent of economic output but that it would not seek to reduce it to zero.

Also in contrast to Fillon’s plan to reduce public sector employment, Valls said he would continue to hire 1,000 more police per year to bolster security in a country under threat of further deadly attacks by Islamist militants.

The defence budget would be increased too, he said.

Valls is one of several candidates vying for the Socialist Party ticket in a primary ballot that takes place in two rounds on Jan. 22 and Jan. 29.

One of the more striking elements of Valls‘ proposals is that adults of 18 years old upwards be given the right to a monthly welfare handout at a time of 10 percent unemployment.

He has spoken in the past of a figure of 850 euros ($887) a month, and says such handouts are needed for all to be able to get a good start in life.

It would be means-tested to apply to only a section of the population and, he said, cost about eight billion euros on top of the primary funding, which would come from a merger of all existing assistance funds.

That is primarily the cost of extending such payments to people of between 18 and 25 years old, a segment that does not benefit from the bulk of current welfare or assistance funds.

One of his rivals in the Socialist primary is proposing a more far-reaching version. Benoit Hamon, a former education minister, wants all French citizens to be given such a payment.

The idea of offering people a monthly welfare handout with no strings attached is largely untested.

Finland has just introduced such unconditional payouts on a limited scale in a two-year experiment designed to test whether it is a viable alternative to traditional systems where people must prove they are seeking work to qualify for such payments.

Hiring freeze to be decided on this month, Georgiades says

Record number of blood donations in 2016