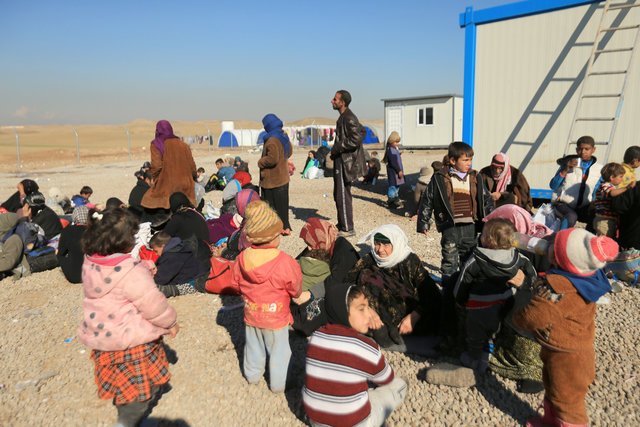 They wait for nightfall before attempting the perilous escape across bombed-out bridges and front lines between Islamic State militants and Iraqi forces.

Some cross the Tigris River by boat, after the US-led coalition bombed the five bridges connecting the city’s two halves to restrict Islamic State movements. Others scale what remains of the bridges using a rope.

Most of the 116,000 civilians who have fled Mosul since Iraqi forces launched their campaign to recapture Islamic State’s biggest stronghold came from the eastern half of the city, where government troops have gradually gained ground.

But as the biggest battle in Iraq since 2003 enters its 12th week, a growing number of people are escaping from the besieged west bank of the Tigris, a half of the city that is still fully under the militants’ control.

“Only the lucky ones get out,” said Jamal, who crossed the river using a rope to climb over the remnants of one bridge and is now at a camp for civilians displaced from Mosul with his wife and three children.

“If they opened a route for a quarter of an hour, not a single person would remain on the western side.”

Although there is no fighting yet in the west, food is scarcer than ever since government-backed Shi’ite militias advanced through desert terrain south-west of Mosul in November, sealing Islamic State’s only access route to the city.

Civilians who fled the west in recent days said the militants had announced they would soon distribute food and break the siege in an attempt to placate their increasingly desperate subjects and convince them to stay.

“HAVE TO EXECUTE THE WHOLE OF MOSUL”

In the run-up to the campaign, aid agencies were preparing for a mass exodus from Mosul. So far most of the city’s residents – numbering as many as 1.5 million – either have chosen to stay or have been unable to escape.

That has worked in Islamic State’s favour, slowing the progress of Iraqi forces seeking to avoid civilian casualties.

Twenty year old Abu Mohsen, whose was ferried across the Tigris by his friend, a fisherman, said when the operation began, most people in the west had planned to wait it out. But as advances slowed last month, their calculations were changing.

“When the operations stopped people said the army will not reach us. They said it will take a year or two,” he said.

Until recently, the militants punished anyone caught fleeing their self-styled caliphate with execution, but recent arrivals at the camp said the sheer volume of people trying to escape had forced them to lessen the penalty.

“They would have to execute the whole of Mosul, so they started to flog people and send them back home instead,” said 22-year-old Abu Abd, who crossed the river three days ago when Islamic State militants were distracted.

Some of the bridges can still be crossed on foot, but Islamic State forbids passage to those they suspect of fleeing to the government side, especially those with women and children.

Most of the boats crossing the Tigris are controlled by Islamic State. Those who make it across the river must then find a way through the frontline between the militants and Iraqi forces, who are fighting street to street.

“When we saw the army it was as though we were dreaming. We couldn’t believe our own eyes,” said Abu Abdullah, who fled from the 17 Tomuz neighbourhood in the west.

The camp is safer, but brings a new kind of hardship. The displaced are not allowed out for security reasons and have no work. For some, it proves too much. Camp workers and displaced people said a displaced man had cut his own throat in a bathroom cubicle on Sunday.