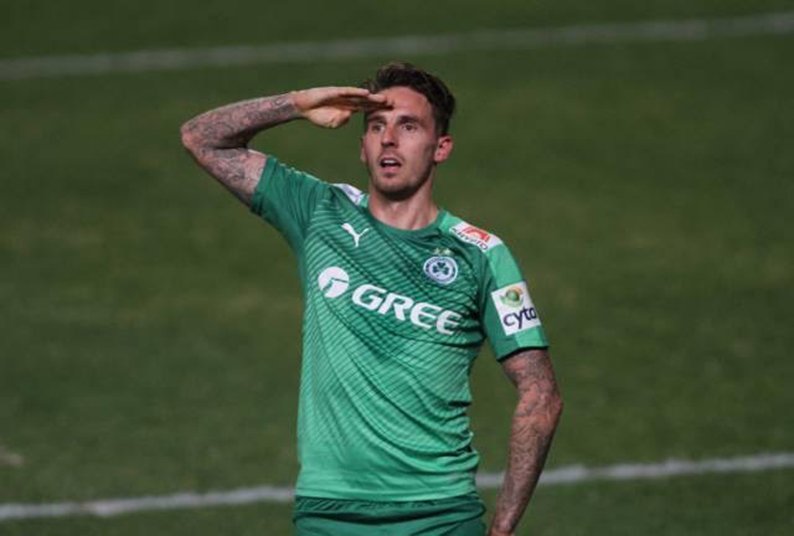 AEL moved to the top of the table on Wednesday after defeating Karmiotissa while Matt Derbyshire’s three goals gave Omonia the win over Ethnikos.

AEL coasted to their 12th win with a comfortable 4-1 win over newcomers Karmiotissa.

Arouabarena gave the Limassol team the lead in the 33rd minute with Soouza adding a second shortly after.

Arouabarena got his second of the game a minute into the second half with Wellington adding a fourth in the 78th minute.

Wheeler managed to get Karmiotissa’s consolation goal seven minutes from the end.

For the second consecutive game Omonia completed a dramatic comeback this time overturning a two-goal deficit against Ethnikos Achnas thanks to a four-minute hat-trick by the league’s top scorer Matt Derbyshire.

Ethnikos had taken lead the through Zelayia in the 8th minute in an entertaining first half where both sides created but missed goal-scoring opportunities.

The biggest chance fell to Omonia’s Margaca in the 37th minute but his shot rattled the crossbar.

In the second half, Omonia pressed forward for the equaliser but against the run of play, Ethnikos’ Katsiarava doubled the score in the 67th minute.

Omonia looked dead and buried and jeers beginning to echo around the ground. Matt Derbyshire though had other ideas and in the space of four minutes grabbed his hatrick.

In the 71st minute he headed in Clayton’s in-swinging corner, while three minutes later he headed in the equaliser this time from a Constantinides cross. A minute later, and with the Ethnikos Achnas defence in total disarray, he prodded the ball into the net to hand Omonia an unlikely three points.

A last gasp goal by Adrambe gave Ermis Aradippou the three points against struggling Doxa. The win takes Ermis back into 6th place.

Paphos bishop: not saying president was drunk or anything when he agreed to go to Geneva

Building bridges with our kids

Cyprus star Artymata through to 400m semis at Olympics