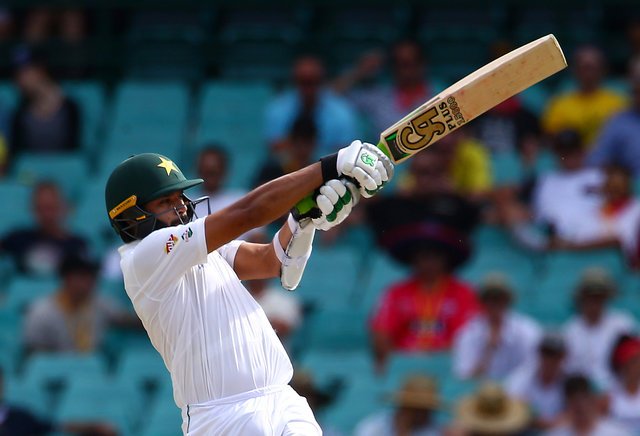 Pakistan's Azhar Ali hits a shot for a boundary

Pakistan’s Azhar Ali and Younus Khan forged a 120-run partnership to stall a rampant Australia on day two of the third and final test on Wednesday after a Peter Handscomb century had helped drive the hosts to 538-8 declared.

Opener Azhar, who hit a double century in the second test defeat in Melbourne that lost Pakistan the series, had contributed 58 to his side’s 126 for two at close of play, while veteran Younus had forged ahead of his partner with 64 not out.

Handscomb had earlier completed the third century of Australia’s innings, matching openers David Warner and Matt Renshaw, as Steve Smith’s men poured on the runs before the declaration, which came seven overs before tea.

Half centuries from Azhar and Younus may have raised Pakistan’s flagging spirits but the Australians will still be confident of victory and a series sweep going into day three at the Sydney Cricket Ground with a lead of 412 runs.

Handscomb had resumed on 40 with Australia 365-3 and never looked like missing out on his second test hundred, becoming only the second Australian to score 50 or more in his first four tests along the way.

Brought into the side with Renshaw in the wake of the Hobart humiliation at the hands of South Africa in November, the 25-year-old has proved a rock in what had become a fragile Australian middle order.

He brought up the milestone with a single off the 194th ball he faced and had nine fours on the board when he was out for 110 in bizarre circumstances.

A TV review showed he had got too deep into his crease when facing a Wahab Riaz delivery and his bat had dislodged a bail, resulting in a rare ‘hit wicket’ dismissal.

Australia’s fielders had the opposite problem as they tried to break up Pakistan’s third wicket partnership in the final session and Handscomb rued two missed run-out chances.

“It would have been nice to take one of those run out opportunities and you never know what could have come from there if we had them maybe four or five down,” he said.

“We just need to come out tomorrow and keep that pressure on.”

Renshaw earlier fell short of dislodging Don Bradman as Australia’s youngest double centurian, the 20-year-old chopping on for 184 in the first hour of the day, and debutant Hilton Cartwright (37), Matt Wade (29) and Mitch Starc, who hit two huge sixes in his 16, also departed before the declaration.

Pakistan coach Mickey Arthur admitted bowlers Mohammad Amir and Yasir Shah were “not in good shape” – the latter carrying a left hamstring injury – but thought the third-wicket stand had given his side a glimmer of hope.

“The resilience and character and intent that has been shown by Younus and Azhar has been a real example to the rest of the dressing room of how we need to play,” the South African said.

“We’ll carry on with same intent and see where that gets us tomorrow.”

Moufflons and Tigers through to cricket final