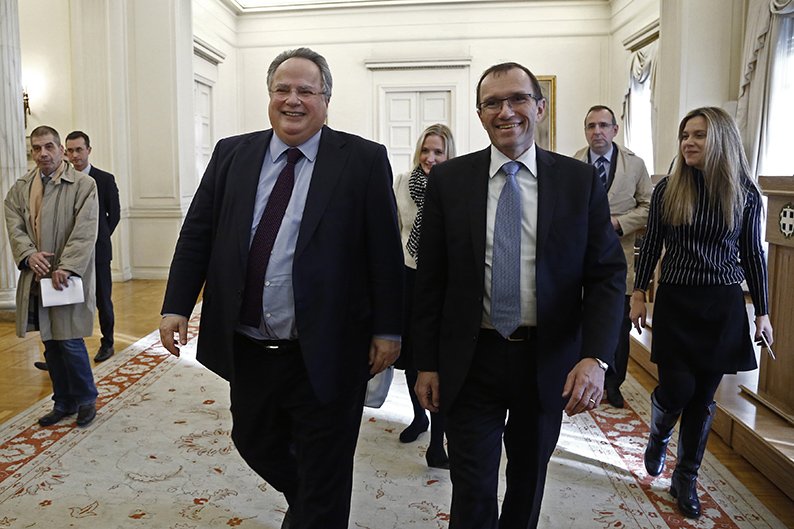 UN Special Adviser Espen Barth Eide said on Wednesday the Cyprus problem would have been solved by now if it were up to the Cypriots only but added there was a willingness to think outside the box by all parties.

Eide, who met in Athens with Greek Foreign Minister Nikos Kotzias said the key outstanding questions were those pertaining to security and guarantees, that would be the main focus of the conference next week in Geneva.

“If it was only up to the Cypriots now, this problem would be solved,” he said.
Eide said the Geneva conference would be open ended and that the leaders were going there with the aim of finding solutions, or at least a framework for a solution, that would lead to a final settlement.

“It is not going to be easy” he said, noting however that “in all quarters, here and in Turkey, in the UK, on the island, there is a will to think outside of the box and look for solutions”.

“So I think that the possibilities are higher than they ever were. So, while it will be difficult, I don’t think it has ever looked better than it does right now, and the more I work on this, the more I get the reconfirmation of that sense. Because I think the other key players that are involved, they may have their differences on many issues, but they all seem to think that a solution to the Cyprus problem is better for whatever broader agendas they have than the opposite of a solution.

And I think that the choice now is very much about using this opportunity or losing it”.

The Special Adviser said the inability to solve the Cyprus problem this time round would not mean that there would not be another chance in the future and encouraged everybody “to use that opportunity now”.

Eide reiterated that he was in favour of a meeting between Greek Prime Minister Alexis Tsipras and Turkish President Recep Tayip Erdogan.

Replying to a question, he said that Tsipras and Erdogan would be present in Geneva, as well as the members of the Security Council.
“There is agreement that consultations can be held with all the players, which would include the Security Council” he said, adding that the EU and international financial institutions could also be present.

Eide  said the Security Council would play a very important role as it will “need to endorse and support and think about the future of the UN presence [n Cyprus] in the case of a success in Geneva”.

According to Eide, UN Secretary General Antonio Guterres would be in Geneva when the international conference starts, on January 12.

He said that the talks in Geneva could last more than a few days, if needed, “but we go there with the ambition of solving it now, and then we will see how things develop when we are there”.

“Of course my preference would be for a very good solution that came quickly. But, if I have to choose, I want the solution to be good and owned by all players, and if that takes more than a few days, we will give it more than a few days. But we go there with the ambition of solving it now, and then we will see how things develop when we are there. Sometimes people can be positively surprised, and maybe things come up, when the key players are there, that we have not been able to fully achieve in the preparations. So that is exactly why we need an international conference at this stage,” he said.

Bicommunal trade union forum ‘at disposal of the leaders’

Coronavirus: With cooperation lacking, virus crisis only highlights the divide