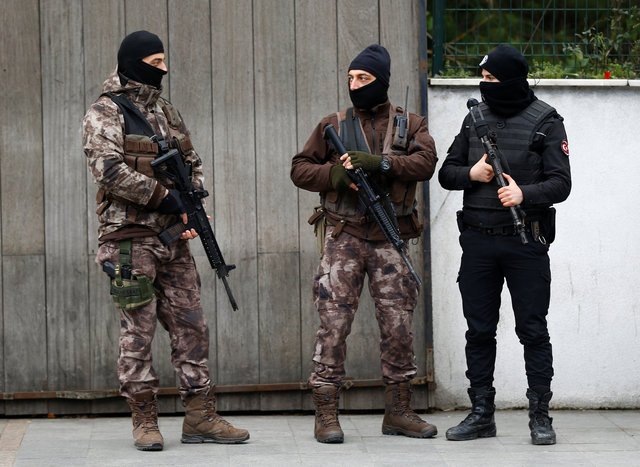 Police special forces patrol outisde the Reina nightclub which was attacked by a gunman, in Istanbul

The man who killed 39 people in an attack on an Istanbul nightclub on New Year’s Day is probably an ethnic Uighur and Turkish security services now know where he might be hiding, Deputy Prime Minister Veysi Kaynak said on Thursday.

Kaynak described the man as a “specially trained” member of a cell who carried out the attack alone and said that while the possibility of him fleeing abroad could not be ruled out, security operations inside Turkey were more likely to find him.

“The terrorist’s identity has been established by security forces and his potential whereabouts have also been determined,” Kaynak said in an interview with broadcaster A Haber, noting that they had also found out who he was linked to.

Islamic State has claimed responsibility for the attack, saying it was revenge for Turkish military involvement in Syria.

Police carried out a dawn raid in a town on the edge of Istanbul on Thursday and detained suspects thought to be connected to the attack, the state-run Anadolu news agency said.

Counter-terrorism police, gendarmes and special forces swooped on a housing complex in Selimpasa, a coastal town just to the west of Istanbul, after receiving intelligence that individuals who may have helped the attacker were there.

Uighurs were among those detained, local media reports said.

The Uighurs are a largely Muslim, Turkic-speaking minority in far western China with significant diaspora communities across central Asia and Turkey.

A security source and media reports have said that the gunman was thought to be a national of a central Asian country.

GUNMAN MAY HAVE HAD HELPERS

The suspect, who authorities have not named, shot his way into exclusive Istanbul nightclub Reina early on Sunday and opened fire with an automatic rifle, throwing stun grenades to allow himself to reload and shooting the wounded on the ground.

In the confusion, several early witness reports said there may have been more than one attacker, something the Turkish authorities have largely ruled out.

“There was only one shooter. The act was carried out with one gun … but there could have been helpers inside,” Kaynak said, noting that investigators were still examining whether he had a lookout or other accomplices inside the club.

It was not immediately clear how many people were detained in Selimpasa on Thursday, but at least 36 people have been held since the attack, according to media reports on Wednesday.

Police in the Aegean coastal city of Izmir on Wednesday detained what they said were 20 suspected Islamic State militants thought to be of Central Asian and North African origin. Fake passports, mobile phones, and equipment including night vision goggles and a GPS device were seized.

The nightclub attack in Istanbul’s upscale Ortakoy district on the shore of the Bosphorus followed a failed coup in July and a series of attacks by radical Islamist and Kurdish militants which have shaken NATO member Turkey over the last year.

President Tayyip Erdogan said the attack on the club, popular with local celebrities and wealthy foreigners, was being exploited to try to divide the largely Sunni Muslim nation.

Among those killed in the attack were Turks and visitors from several Arab nations, India and Canada.