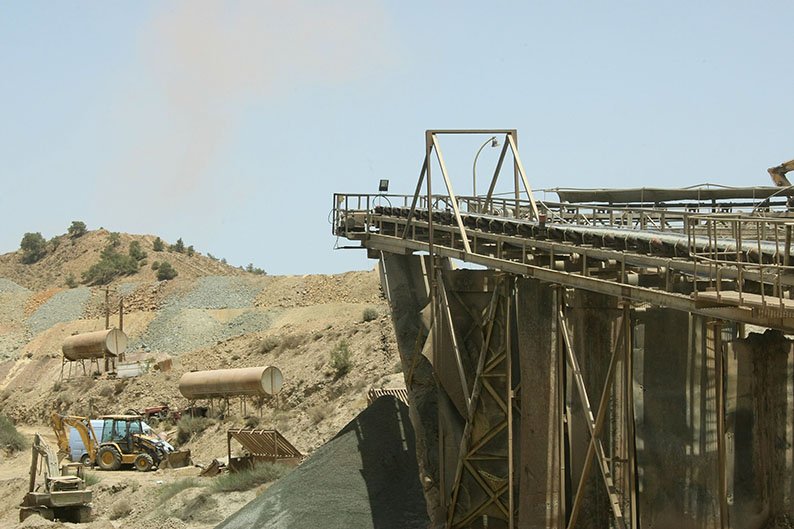 HELLENIC Copper Mines, the only mining company operating in Cyprus, plans to extract gold from ore reserves amassed over the two decades the company has been mining copper, it emerged on Thursday.

The company is in the process of building a new gold-extraction unit within the Skouriotissa mine, where it plans to transport gold-bearing ore reserves from the Strongylos mine in Mathiatis.

The proposed project, for which an environmental-assessment study has been prepared and submitted to the environment department, calls for the mining and transport of ore from Strongylos to the Skouriotissa gold plant.

The Strongylos ores, which have been sitting at the mine for years, are a potential source of pollution for the area.

According to the report, the quantity and quality of the gold-bearing ore stored in Strongylos has been calculated through extensive geological surveys.

Hellenic Copper Mines’ proposal includes the leasing of an area of 0.06 square kilometres at Strongylos, which includes the piles of ores, the old mine, and access roads.

Since it began operations in 1996, HCM separated gold-bearing ores from the copper-rich ones but did not attempt to process them because the project was deemed economically unviable, due to the low concentration of gold.

Today, due to the spike in the price of gold and the quantities of gold-bearing ores amassed at Strongylos, the operation is considered economic.

A positive opinion on the gold plant proposal has already been issued by the Environmental Authority.

Construction of the gold plant is already underway, and it is expected to be operational in the coming months.

As a first step, the plant will process ores reserves from the Strongylos mine, which will be transported to Skouriotissa, with future planning possibly examining other areas of interest, after securing all required permits.

HCM estimates are that 4,000 tonnes of gold-bearing ores reserves per month can be transported from Strongylos to Skouriotissa.

The expected monthly production at the Skouriotissa plant is 20 kilos of gold and 80-100 kilos of silver.

In the Mathiatis, Nicosia, area, two mines operated, one in the south – which is the Strongylos mine – dating back to 600 BC, and the northern mine, which mainly extracted iron pyrite.

Total production in Cyprus has been approximately 5 tonnes of gold and 27 tonnes of silver.