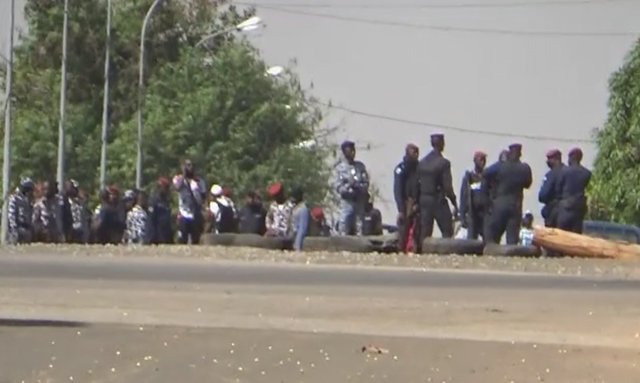 Disgruntled soldiers demanding salary increases and the payment of bonuses seized control of Ivory Coast’s second-largest city, Bouake, on Friday, according to the defence minister.

Ivory Coast – French-speaking West Africa’s largest economy – has emerged from a 2002-2011 political crisis as one of the continent’s rising economic stars.

However, the army, thrown together at the end of the conflict from a mixture of former rebel factions and government soldiers remains an unruly force riddled with internal divisions.

A statement from Defence Minister Alain-Richard Donwahi read out on state-owned television said a group of soldiers had used their weapons to force their way into the military headquarters in Bouake soon after midnight and then made their demands.

“All soldiers are asked to remain calm and return to barracks so that lasting solutions can be found,” it said.

Heavy gunfire was heard from around 2 a.m. (0200 GMT) in Bouake – a city of around a half million inhabitants in the centre of Ivory Coast – and sporadic shooting continued into the late morning.

Bouake was the seat of a rebellion that controlled the northern half of the country from 2002 until Ivory Coast was reunited following a civil war in 2011.

Shooting also broke out mid-morning at a military base in Daloa, the main trading hub in the western cocoa belt, and residents said soldiers, some of them masked, were patrolling the streets in 4x4s.

Cocoa prices rose as the unrest prompted a wave of buying.

Military sources had said demobilised combatants – mainly former rebels from the decade-long conflict – were behind the uprising, during which weapons were looted from Bouake’s police stations. But authorities and a lawmaker later blamed soldiers on active duty.

“None of them are demobilised fighters,” said Bema Fofana, a member of parliament representing Bouake who spoke to several of the soldiers. “There are fewer than 200 of them that I saw.”

Fofana said the soldiers had said they were demanding 5 million CFA francs ($8,000) each, as well as a house.

The soldiers set up positions at entry points into the city and blocked at least one road. Footage from state-owned RTI television showed a pick-up truck laden with soldiers racing through mostly empty streets.

An army officer who was not part of the mutiny said there were many rebel soldiers at the north and south entrances to the city. “We are on alert and await instructions from the hierarchy,” he said by telephone from Bouake.

He added that the mutineers had taken the second in command at Bouake’s main military base hostage.

“The city is deserted,” said Ami Soro, a teacher living in Bouake. “Men in balaclavas are patrolling the city on motorcycles or in cars. They aren’t attacking residents … They told us to stay at home.”

An officer at Ivory Coast’s military headquarters in the commercial capital Abidjan said reinforcements had been sent, adding: “The situation remains unstable and serious in Bouake.”

A similar uprising occurred in 2014, when hundreds of soldiers barricaded roads in several cities and towns across the country demanding payment of back wages.

The government agreed a financial settlement with the soldiers, who returned to barracks, possibly emboldened to try their luck again later.

London tube strike set to cause commuter chaos on Monday