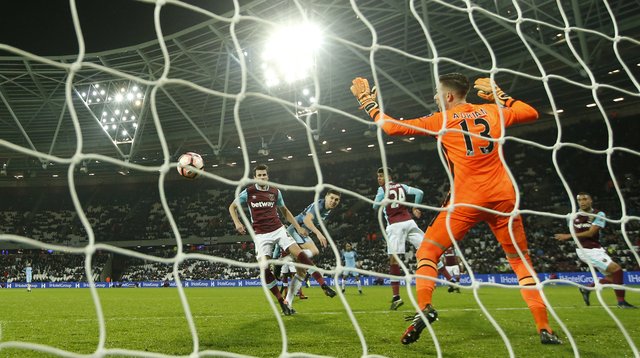 Manchester City crushed West Ham United 5-0 to give manager Pep Guardiola the perfect introduction to the FA Cup as they cruised into the fourth round with a thumping victory at the London Stadium on Friday.

After taking the lead through Yaya Toure from the penalty spot, the five-times winners swept their opponents away with devilish attacking verve, inflicting on the beleaguered Hammers their worst ever home defeat in the competition.

They survived a solitary scare when the hosts’ Sofiane Feghouli inexplicably shot wide from in front of an open goal, but went in at the break with a 3-0 advantage after an own goal from Havard Nordtveit and an effort from David Silva.

Sergio Aguero then flicked the ball home early in the second half to become the third highest scorer in City’s history and defender John Stones netted his first for the club with a header from a corner with seven minutes remaining.

If City’s inconsistent form had started to weigh heavy on manager Guardiola, who was in the tetchiest of moods following their Premier League victory over Burnley on Monday, the Spaniard’s spirits would have been lifted by their display in the capital.

There were flashes of his former Barcelona side in some of City’s attacking play and the ease with which they dismantled a poor West Ham, who looked off the pace from the start and were thoroughly outclassed throughout a nightmare 90 minutes.

Efforts from Pablo Zabaleta and Silva, which were blocked and saved by defender Winston Reid and goalkeeper Adrian respectively, served early notice of City’s intent, but they had to wait 33 minutes to open the scoring from the spot.

Zabaleta powered into the box and had his heels clipped by Pedro Obiang, leaving Toure to step up and blast his effort past Adrian.

West Ham’s Feghouli, under pressure from Gael Clichy, somehow pulled an effort wide from two metres out with the goal gaping, but that was about as good as it got for the hosts.

Two City goals in two minutes before halftime effectively killed the tie with both stemming from flowing passing moves.

Nordtveit turned into his own net with Raheem Sterling lurking to double City’s lead, while the England winger then teed up Silva to calmly control and stroke the ball into the net two minutes before the break.

Any hope of a second-half resurgence was crushed five minutes after the restart when Aguero got his milestone goal, turning Toure’s shot home from close range for his 154th for the club, one more than Colin Bell. Only Tommy Johnson (166) and Eric Brook (178) have more.

Stones rounded off the victory with a header that Mark Noble tried in vain to clear of the line.