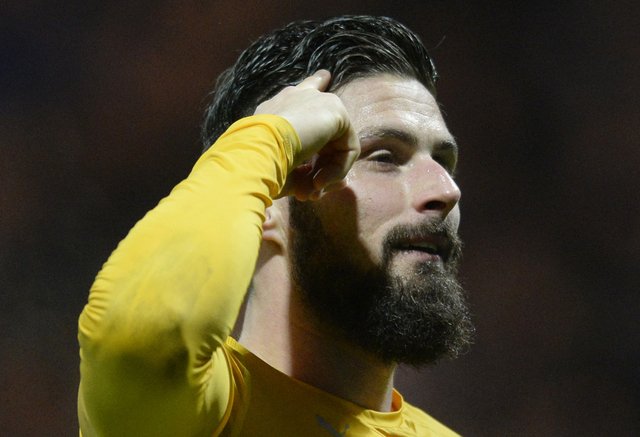 Arsenal were again indebted to Olivier Giroud after the Frenchman’s 89th-minute strike secured a 2-1 victory at second-tier Preston North End in the FA Cup third round on Saturday.

Giroud has now scored four goals in his last four games including a late winner at West Bromwich Albion, an equaliser against Bournemouth in midweek and last weekend’s extraordinary “scorpion” volley against Crystal Palace.

His deflected effort at Deepdale was rough on Preston after the Championship side had bossed the first half and should have been ahead by more than Callum Robinson’s early effort.

Had another Robinson effort not been disallowed or Jordan Hugill got a touch when sliding in to meet a low cross with the goal at his mercy, Arsenal manager Arsene Wenger might have suffered a first defeat in an FA Cup third round tie.

They improved after the break though and after Aaron Ramsey had scored his first goal of the season a minute after the restart the visitors looked the more likely winners.

“Someone reminded me yesterday that I have never been out in the third round in 21 years, but tonight, in the first half, it was close,” Wenger said. “Preston played with enthusiasm and quality in the first half, they were quicker than us all over.

“We were not at the races in the first half and we were beaten everywhere, we didn’t win the duels and were outplayed.

“But sometimes when you come out of the Christmas period and subconsciously think it’s a bit easier it’s more difficult in the FA Cup. At halftime we knew we could have been out.”

Preston took the lead in the seventh minute when Aiden McGeady’s dazzling turn and pass was not dealt with by Arsenal’s defence and Robinson fired home.

However, Preston could not build on their lead.

Ramsey produced a stunning finish to level it up after halftime. Preston then mounted a rearguard action which deserved a replay until Giroud popped up to sweep home from close range after a neat back flick by Lucas Perez.

Four of Giroud’s last six goals have come in the 86th minute or later and he has scored in each of his past eight starts.