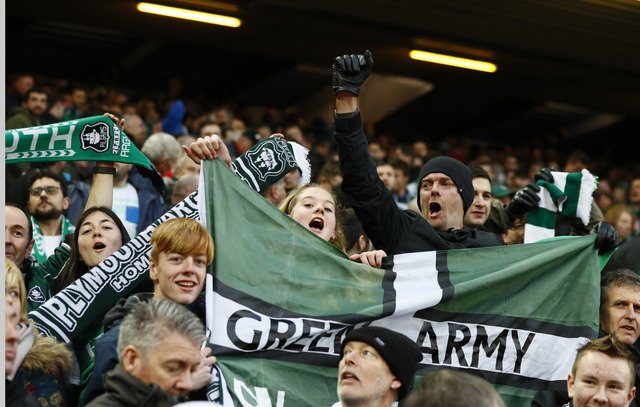 Fourth-tier Plymouth Argyle shut up shop and kept the door firmly closed to earn a 0-0 draw away to Liverpool’s youngest ever starting XI in Sunday’s FA Cup third round tie at Anfield while Chelsea and Tottenham Hotspur both won.

Determined defending and unstinting effort kept League Two Plymouth in the game against a Liverpool side lying second in the Premier League, almost 70 places above them.

Spurs, eight-times FA Cup winners, took a long time to break down Aston Villa before winning 2-0 but Premier League leaders Chelsea had no such trouble against third-tier Peterborough United, winning 4-1 despite having John Terry sent off.

Middlesbrough also had a man dismissed but beat Sheffield Wednesday 3-0.

Liverpool, with a League Cup semi-final first leg against Southampton to come on Wednesday, made 10 changes from the side that drew at Sunderland on Monday and fielded five teenagers.

Argyle, spurred on by almost 9,000 noisy fans who travelled the 470 km to Merseyside, defended stoutly while showing little ambition to go forward and test a Liverpool defence in which Joe Gomez returned after more than 15 months out injured.

The visitors had only 23 percent of the possession, not managing a shot for 60 minutes and finally bringing a save from Liverpool goalkeeper Loris Karius five minutes later.

The home side, however, had few outstanding chances despite 28 attempts on goal.

Sheyi Ojo, 19, missed with a header from six metres early on, 17-year-old Ben Woodburn was denied by Argyle goalkeeper Luke McCormick and when Divock Origi put the ball in the net he was adjudged to have fouled his marker.

Liverpool manager Juergen Klopp waited until just over an hour had been played before making any substitutions. He then sent on Daniel Sturridge for Emre Can and the England international immediately put a shot just wide.

Adam Lallana and Roberto Firmino then replaced Ovie Ejaria, 19, and Woodburn, who had succeeded Michael Owen as the club’s youngest goalscorer earlier this season.

As the pressure increased in the last 10 minutes, Sturridge sent a weak header and a low drive wide, and McCormick clutched a deflection off a defender right on the line to earn a replay.

He gave them the lead after 18 minutes, which was extended by Belgian forward Michy Batshuayi and Willian.

Terry, making his first start since October, was then sent off for dragging down Lee Angol to prevent a clear scoring opportunity, but Pedro scored his second goal for the 10 men after Tom Nichols had pulled one back.

Manager Antonio Conte said later that Chelsea may appeal against the dismissal.

Tottenham, making nine changes, could not break down Villa until England midfielder Dele Alli appeared as a substitute for the final half an hour at White Hart Lane.

He helped another Spurs replacement, Frenchman Georges-Kevin N’Koudou, set up defender Ben Davies to score his first goal for the club in the 71st minute.

Middlesbrough defender Daniel Ayala was the miscreant at home to Championship (second-tier) side Wednesday, receiving a straight red card just before the hour mark.

Alvaro Negredo got their second in the 67th after a goalkeeping error and Marten de Roon claimed ‘Boro’s third in added time.

Fulham reached the fourth round with a 2-1 win at Cardiff City in a meeting of two Championship sides.

The winning goal was bundled in by 16-year-old Ryan Sessegnon, an England under-17 international, making him one of the youngest scorers in the history of the competition.

The fourth round draw takes place on Monday before Cambridge United host Leeds United in the final third round tie.