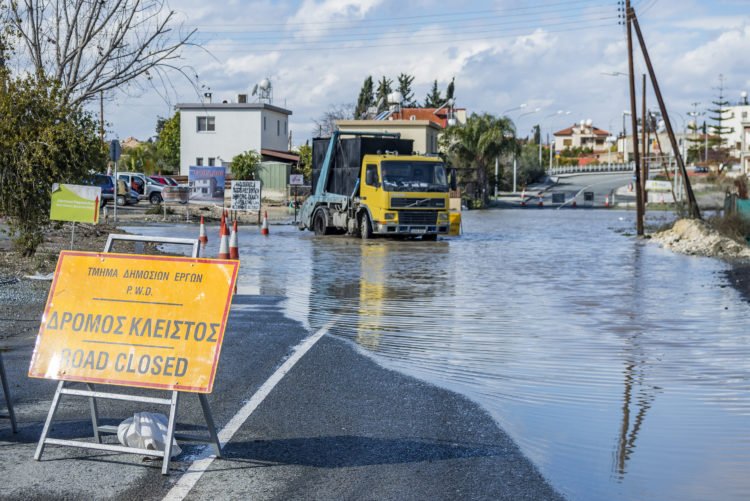 Local authorities in Trachoni urged the state to construct the necessary infrastructure to prevent flooding every time there was heavy rain in the area.

The community’s main road becomes a lake whenever there is a downpour, its community leader said on Monday, as he appealed to the state to proceed promptly with the anti-flooding works that were announced last year.

According to community leader Kyriacos Christodoulou, the Constantinou and Evripidou Avenue in Trachoni has turned into “a small lake” following the recent downpour making it impossible for motorists to drive through, while shops and near-by houses are faced with flooding problems.

“This situation is unacceptable for an urban street that connects Limassol with the western communities and though which hundreds of cars pass daily,” Christodoulou told the Cyprus News Agency.

The flooding problem had been an issue for years he said, but when in 2012 the €4.5mn project for the redevelopment and widening of the road was completed, no flood prevention works were carried out.

Surrounding fields that used to absorb a lot of the rain water have now been built over and this has exacerbated the problem, he said.

The interior minister announced last year that €500,000 would be spent on flood prevention measures – €300,000 was to be paid by the town planning service and €200,000 by the public works department – but nothing has been done he said..

“Unfortunately, … it emerged that the project could not proceed because there was no way for the money to be transferred by the town planning service to the public works department,” Christodoulou said. That money is now gone, he said, as it was calculated in last year’s state budget. “It is a messed-up situation”.

Christodoulou said that he was in no position to know whether that money has been included in this year’s budget, while it is not still clear which state service bears responsibility for this mix up.

It is unacceptable, he said, that a year after the minister’s orders, still, nothing has been done.

Whenever shops and houses flood, he said, crews of the public works department are called to pump the water.

“There are constant problems and reactions from the shop owners of our community’s main road, but it also poses dangers to drivers who may not know the road well and this may lead to accidents,” Christodoulou said.

Baghdatis through in Auckland

Supreme court orders extradition of Hezbollah suspect to US

Coronavirus: more special-education pupils to return to school after approval by medical board

Coronavirus: bulk of repatriation flights set to end on June 8, provision being made for stragglers