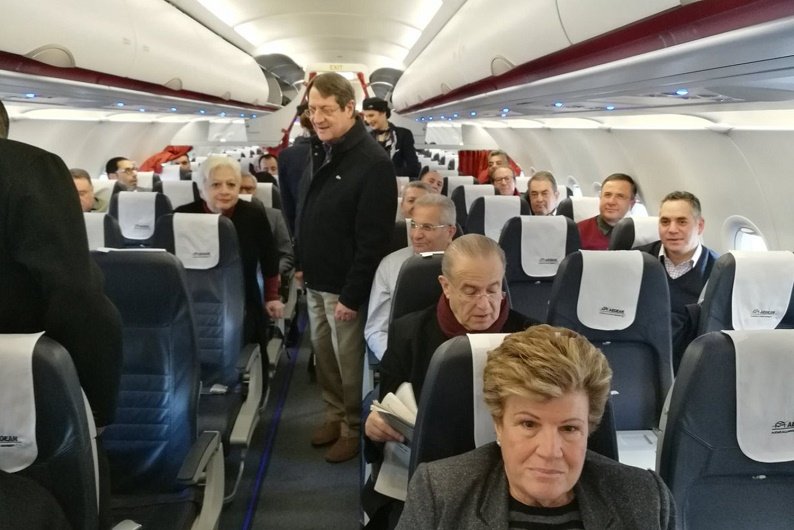 On the plane to Geneva

Four of the five hardline parties said on Thursday they would not attend a reception that is part of the conference on Cyprus over disagreements with the president’s handling of the negotiations.

The fifth party, Giorgos Lillikas’ Citizens Alliance, said it would accompany the president to the conference despite its disagreements.

The four parties, Diko, Edek, Solidarity, and the Greens, said Anastasiades’ acceptance of the Turkish demand to convene a five-party conference reversed a long-standing decision that set the Republic’s participation as a condition, and ensuring the breakaway state was not upgraded.

In a joint written statement, they said Anastasiades had also set additional conditions for convening an international conference: an agreement on territory with the submission of maps, and an agreement, or being within reach of an agreement, on all other internal aspects of the problem.

“Unfortunately a few hours before the scheduled start of the five-party conference, it is determined by everyone that none of these conditions has been met,” the four parties said.

The hardliners claimed that the Republic had not been invited to take part in the conference while the participation of Turkish Cypriot leader Mustafa Akinci upgraded the breakaway state.

An agreement on the internal aspects of the Cyprus problem was not within reach, they said, while Turkey’s intransigence intensified with the unacceptable demand for rotating presidency.

The parties said there was a risk of linking all pending matters with the security and guarantees issue, which must be the only one on the conference agenda.

They added that they would not be taking part in the reception, which was part of the conference, and proposed a comprehensive review of the negotiations by the National Council.

Citizens Alliance chairman Lillikas apparently had a last-minute change of heart, according to his Green party colleague Giorgos Perdikis, and decided to join the president.

“As long as the talks in Geneva carry on, we decided that we will submit our disagreements and our proposals at the National Council,” the party said, announcing that Lillikas would accompany Anastasiades.

Coronavirus: With cooperation lacking, virus crisis only highlights the divide