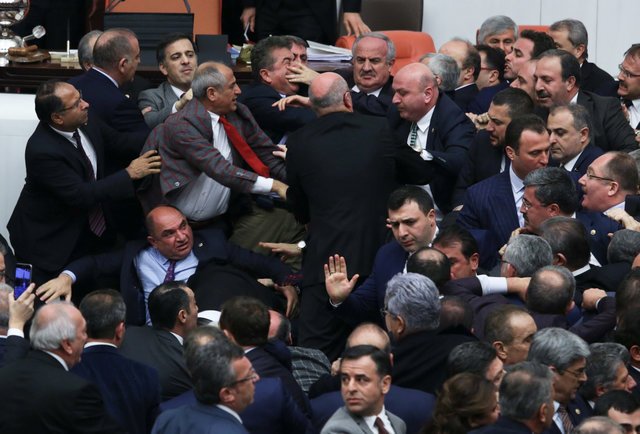 His comments came after lawmakers threw punches and shoved one another in parliament overnight in a debate on the reform package, adding to the sense of political and economic unease that has helped pushed the lira to record lows this week.

The AKP, backed by the nationalist MHP, is pushing through the legislation that Erdogan says will bring the strong leadership needed to prevent a return of the fragile coalition governments of the past.

“If the proposal does not pass in the general assembly, even if nobody wants it, Turkey will have to hold elections,” said Mustafa Sentop, an AKP lawmaker and head of parliament’s constitutional commission.

Under the current reform plans, presidential and general elections will be held in 2019.

The reform will enable Erdogan to appoint and dismiss government ministers, take back the leadership of the ruling party and govern until 2029.

The main opposition CHP and the pro-Kurdish HDP, the second largest opposition party, fear these changes will fuel authoritarianism.

Lawmakers from the AKP and CHP came to blows as they crowded around the assembly’s podium during heated debate overnight.

Despite the standoff, the third, fourth and fifth articles of the 18-article bill were approved in the parliamentary session, which continued until the early hours of Thursday. Debate was scheduled to resume on Thursday afternoon.

The bill needs the support of at least 330 deputies in the 550-seat assembly to go to a referendum, expected in the spring. The AKP has 316 deputies eligible to vote and the MHP 39.

The three articles were each passed with 341 to 343 votes in favour.