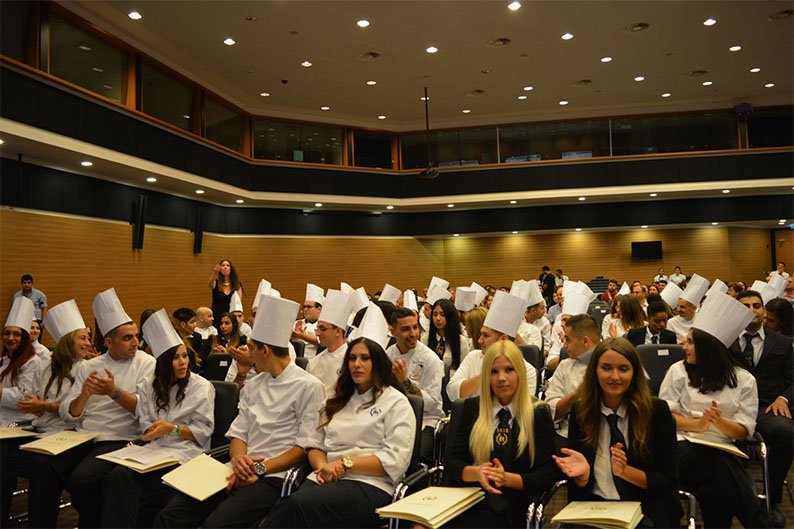 Students at the HHIC graduation ceremony

MEMBERS of parliament have called for more state support to the Higher Hotel Institute (HHIC) and criticised the government for trying to move the school from its current location in Nicosia to serve private interests.

Zacharias Koulias, the head of the House watchdog committee that visited the premises of the HHIC on Thursday, said that should the government decide to move the school to new premises to satisfy private interests, it would constitute a squander of public resources.

The last eight years, nine very costly studies have been carried out concerning the transfer of the HHIC, Koulias said, and wondered whether there were expediencies behind the decision to move the school.

In the case of a re-housing, he said, the plot where the HHIC is built on, and which had been expropriated for this purpose, is to be returned to its owner as the law stipulates.

“I wonder if some people, and how easily, will want to grab this area, due to its massive value,” Koulias said.

The HHIC, which is a tertiary educational institute which offers programmes in hotel and catering studies, is located in Aglandjia on a hill, next to the Filoxenia conference centre, in the same area as the old campus of the University of Cyprus and the Hilton hotel. It is a continuation of the Central Hotel Training School, founded in 1965, and the Hotel and Catering Institute that succeeded it in 1969 as a joint project of the Republic of Cyprus, the United Nations Development Programme and the International Labour Office.

Koulias said that the government cannot afford at the moment to tear down the existing infrastructure of the HHIC and build a new one elsewhere. Such an attempt would constitute squandering of public resources.

“This space, with its excellent infrastructure, not only should not be moved, but it should receive support and be upgraded,” Koulias said. The legislature should fight the decision for the institute’s removal, he said.

Akel MP Irini Charalambidou said that people who have rights to the land where the HHIC is built, have already taken legal measures against the government “that attempts to hand over the hill to private hands”.

She added that the HHIC could very well be upgraded to a regional educational centre.

The head of the HHIC, Evi Soteriou, told MPs that students from European, Middle Eastern and North African countries continue to express interest to study at the institute.

The hotel industry has been a supporter of the idea that the HHIC be moved to a coastal location where tourism is booming.

In October, Paphos mayor Phedonas Phedonos announced that his municipality had officially expressed interest for the HHIC to be relocated to his town. He justified this by saying that Paphos, as the eminent tourist town, should be entitled to host the HHIC, as it is the town with the most hotel beds, and with the largest number of tourists.

Getting supply chains in check