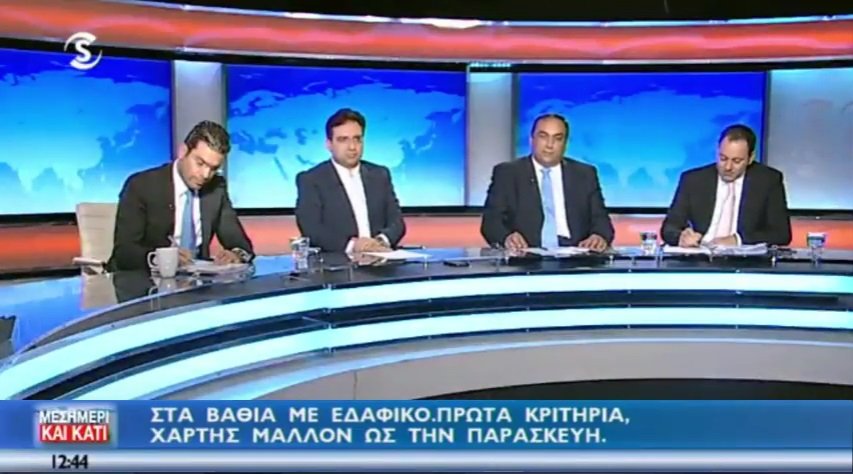 Adding to the general sense that there is indeed something different about these talks relative to previous ones, television coverage of the Geneva sessions this week has been largely fair and unbiased, in contrast with the skewed broadcasting in favour of the ‘No’ campaign during the week of talks at Burgenstock almost 13 years ago.

From Monday to Thursday, Cypriot TV split airtime more or less evenly among 197 party representatives – 97 from the ‘pro’ solution camp and the rest in those opposing President Nicos Anastasiades’ handling of the talks.

This was certainly not the case in the run-up to the April 2004 referendum for the UN proposal for a settlement of the Cyprus problem, colloquially known as the Annan Plan.

Quantitative and qualitative research conducted by Intercollege’s mass media institute (IMMC) on the behaviour of media in 2004, particularly during the week of talks at Burgenstock, which was published in 2009, found that “the views of politicians who subsequently backed the proposed plan were not presented” on local TV.

“The general conclusion and sense that was created was that during the negotiations the behaviour of the United Nations toward the Greek Cypriot side had been unfair, and that its proposals had been ignored,” the study said.

“The impression that was conveyed was that the changes [to the plan] satisfied only Turkey’s demands.”

Suppressing the ‘pro’ camp’s views was not the only way a negative stance was promoted, according to the study: the order in which news stories were presented, the suspiciously extensive use of anonymous sources, particularly for negative stories, and the blurring of the lines between fact-reporting and commentary, were the main methods used to steer public opinion towards a ‘No’ vote.

The Burgenstock conference being the closest approximation to this week’s Geneva conference in the history of the Cyprus problem, and since the broadcasting landscape remains largely the same as it was back then, some parallels may be drawn for purposes of comparison.

The crude numbers surrounding this week’s coverage appear to suggest that a shift has come about.

Sigma TV, the channel whose owner Costis Hadjicostis confessed in a self-penned book last year that in 2004 he had turned his media’s crosshairs against the plan months before it was even finalised, this week hosted 53 politicians from all parties – 26 from the pro camp and 27 opposing the talks. (Hadjicostis is still Sigma’s owner.)

Ant1 TV, whose owner Loukis Papaphilippou was also named in Hadjicostis’ book as having also pledged to oppose the plan, gave airtime to 10 pro-campaigners and only six against. (Papaphilippou still owns Ant1.)

So if the channel-owners are the same and the nature of the event they are covering is largely the same, what has changed?

First of all, the government did. In power in 2004 were Diko and Akel, and although the large communist party in principle backed the talks, it had assumed a cautious stance and ended up opposing the plan. This time, a cleanly pro-solution government is in power, headed by the single most vocal proponent of the Annan Plan in 2004. On the other side, decades of a reliably intransigent Rauf Denktash had just been replaced by Mehmet Ali-Talat, as yet an unknown quantity.

Second, social media. Television’s traditional power emanated in large part from the advantage of unilateral flow of information it enjoyed. Since the advent – and growing popularity – of social media, it has become a lot harder to promulgate false or unpopular views unanswered. The people have found a megaphone, and they are using it.

Third, the form and shape of the solution itself changed. Though the ongoing talks have yet to flesh out a comprehensive, self-executing settlement proposal, what has been agreed so far is the result of consensus between the two leaders, contrary to the forced and arbitrated proposal that was the end result of UN mediation in 2004. Even where today’s agreed arrangements look similar to those included in Annan V, they somehow have a different feel to them.

Fourth, we may have inched ahead on the learning curve. We now know what 2004 brought us, we know the feel-good factor came at a cost, and the 2013 financial ruin may well have let us in on the big secret: the ‘economic miracle’ of the late 1970s notwithstanding, the paradigm of an invincible economy we are not. It is conceivable that we may have finally learned that, when all has been said and done, the cost of a solution is compromise.

But the sense that, despite the numbers, local TV channels have had such a dramatic change of heart may be too early to call. For all the similarities, there is at least one key difference between Burgenstock and Geneva: all the players went into the former fully aware that it was the final round of years of talks, and that it would produce the final proposal that would be put to separate and simultaneous referenda a few weeks later. The same players went into the Geneva conference under the exact opposite assumptions.

As the inconclusive results of Geneva made clear, Espen Barth-Eide’s “last mile” is still in the future, and so is the final verdict on the media’s behaviour on the most realistic prospect for a settlement of the Cyprus problem.

Why Europe became a baby