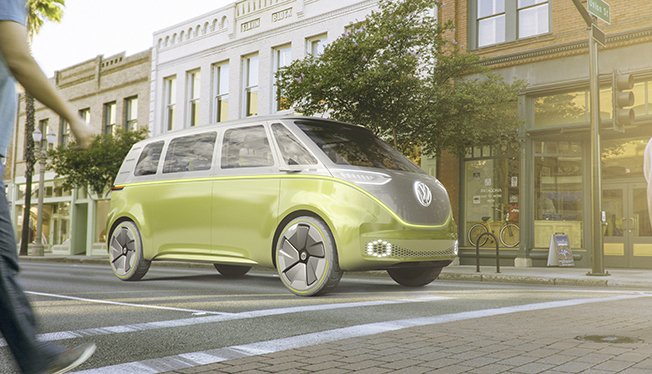 Volkswagen’s I.D. BUZZ was billed in Detroit as ‘the microbus of the new age’. The electric MPV concept gives a renewed look ahead towards the future – with the aim of 'bringing electric mobility for all into the world of tomorrow'

WE are living in what will almost certainly become known as the era of electric mobility. Almost all major car makers are very much focused on developing electric vehicles (EVs) – and many of these EVs will also, within a few years, be autonomous drive cars.

The North American International Auto Show (NAIAS) has its fair share of EVs on display. Among them Volkswagen’s I.D. BUZZ was billed in Detroit as ‘the microbus of the new age’.

The electric MPV concept gives a renewed look ahead towards the future – with the aim of “bringing electric mobility for all into the world of tomorrow”.
It follows on from the I.D. Concept all electric hatchback shown at the Paris Motor Show in September last year.

Dr. Herbert Diess, Chairman of the Volkswagen Brand Board of Management, explains: “The I.D. BUZZ stands for the new Volkswagen: modern, positive, emotional, future-orientated. By 2025, we want to sell one million electric cars per year, making e-mobility the new trademark of Volkswagen. The new e-Golf already offers 50 per cent more electric range. From 2020 onwards we will then launch our I.D. family, a new generation of fully electric, fully connected cars. It will be affordable for millions, not just to millionaires.”

With the I.D. BUZZ concept vehicle in Detroit, Volkswagen aims to demonstrate just how rich in features the electric mobility of tomorrow will be – an all-wheel drive ‘spatial marvel’ with electric motors on front and rear axles, a fully automated driving mode (I.D. Pilot) and a new generation of indicators and controls.

“The I.D. BUZZ is the next generation MPV. It is based on the new Modular Electric Drive Kit (MEB) and provides comfort and loads of space for long journeys. Its electric range as per the NEDC is up to 600 kilometres”, explains Dr Frank Welsch, Member of the Board of Management Volkswagen Brand for the Development Division.

The I.D. BUZZ takes on new energy inductively or from a charging station. At a charging power of 150 kW, it takes around 30 minutes to charge up to 80 per cent.

Just four months ago Volkswagen unveiled the little brother of the I.D. BUZZ at the Paris Motor Show: A compact electric car that will launch in 2020 with ranges of up to 600 kilometres. It will be the first car based on the MEB to go into series production, and the first VW concept car that can be driven in fully automated mode.

The new I.D. BUZZ is now the first MPV with which that is possible: all that is needed is a gentle push on the steering wheel and it instantly moves back, melts into the cockpit and switches the I.D. BUZZ from manual into the fully automated ‘I.D. Pilot’ mode (envisaged as of 2025). Now, the driver’s seat can be turned around and the driver can face the passengers in the back. Laser scanners, ultrasound sensors, radar sensors, area-view cameras and a front camera scan the surrounding area, with other traffic data being received via the Cloud.

In the I.D. BUZZ the conventional cockpit no longer exists. Instead, the MPV projects the key information by means of an AR (augmented reality) Head-up Display into the driver’s field of vision – in 3D, in virtual format onto the road. Features such as the infotainment and air-conditioning functions are operated via a removable tablet. The main controls for driving, meanwhile, are located on the steering wheel. Its inner section is not – as is normal today – fitted with spokes and buttons, but rather has a kind of touchpad with capacitive fields, thus turning the traditional steering wheel into a multi-functional touch-sensitive steering wheel.

The use of space in the concept car, which has up to eight seats, is “better than in any other electric vehicle” says VW. The multi-variable seating and interactive integration “makes a great deal possible”. Thanks to the extended MEB XL platform, this 4,942 mm long, 1,976 mm wide and 1,963 mm high concept vehicle provides what, for its class, are extraordinary spatial dimensions inside.

VW claims the I.D. BUZZ is one of the world’s most comfortable cars. At 3,300 mm, it has an extremely long wheelbase, and with the battery located in the vehicle floor the centre of gravity is lowered and ensures perfect weight distribution, while the suspension uses electronically regulated shock absorbers to contribute to top-class comfort.

The zero emission all-wheel drive system has a power output of 275 kW / 374 PS (the electric motors front and rear each delivering 150 kW). The version of the I.D. BUZZ presented in Detroit reaches 100 km/h in 5 seconds and its top speed is restricted to 160 km/h.

Having nothing to lose with the new BMW X1