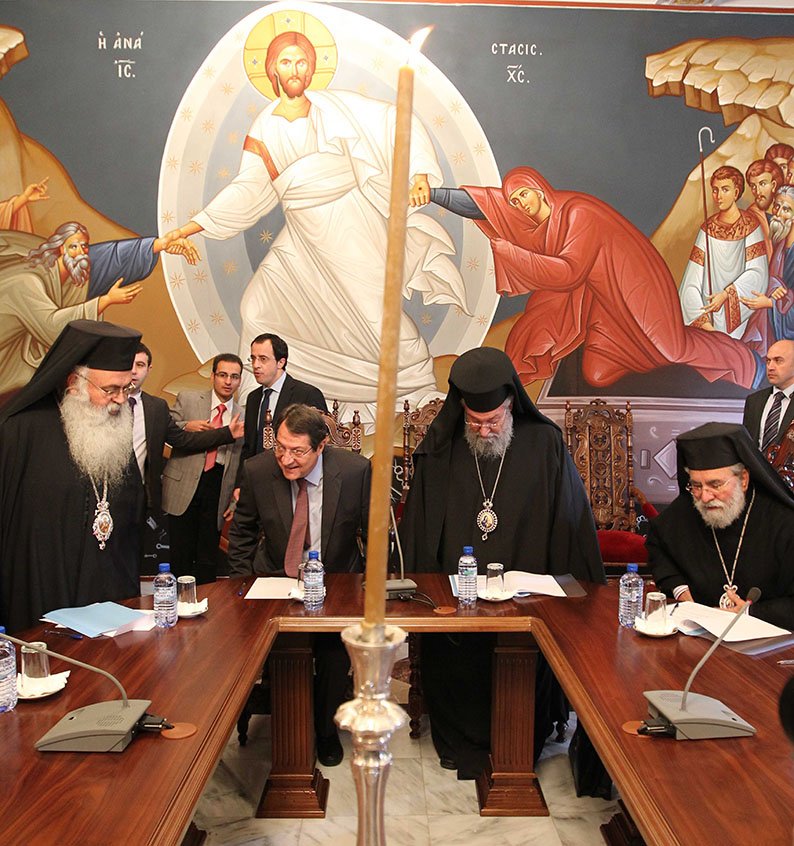 The President of the Republic, Nicos Anastasiades, at a meeting with the Holy Synod on the national issue.

CALL IT a coincidence or whatever else you like. On the afternoon of Thursday, January 5 I turned on the television and a private station was showing two theologians discussing a range of religious matters. As such matters do not excite me, I switched to the state broadcaster and what a surprise! It was showing a programme of religious content as well, featuring the Bishop of Limassol Athanasios who with his customary bland style was dissecting our sins to an awe-struck journalist.

And as I cannot take seriously a bishop who claimed those not of the Orthodox faith were ‘heretics’ and declared, with indescribable self-importance, that a visit here by the Pope would scandalise the souls of innocent, devout Christians, I switched off the television and headed off to meet my friends at our favourite haunt. On the way, I turned on the car radio and – another surprise – the station I had randomly selected was talking about the miracles of Saint Raphael. It was impossible to escape the religious lectures; no difference between Saudi Arabia and Cyprus.

Cypriot society has made great leaps of progress in the recent years. From the closed society it had been half a century ago, it is now being transformed into an open society. A closed society is marked by the way it maintains unity through a common belief system – mainly religious – that is not subject to negation, the verdict of experiment or critical debate. In Cyprus, religion played a leading role in maintaining a closed society. In the open society, to which we are heading but have not yet reached, institutions, pluralism, secular power, freedom of thought and above all critical questioning – that is the promotion of alternative theories and alternative solutions to social, economic and political problems – dominate.

The secularisation of Cyprus will never be achieved as long as the head of the church fully controls the ministry of education and substitutes scientific knowledge for myth-making and the theological interpretation of reality. It is tragic that a graduate of secondary school does not know that the church in Greece excommunicated Rigas Fereos, the giant of Greece’s liberation struggle, Eleftherios Venizelos, Greece’s leading statesman and Nicos Kazantzakis an author of world renown, (although the latter’s excommunication was not approved by the Patriarchate).

Even today, because of the church’s influence, mention of Kazantzakis is taboo at state schools. One of his most famous novels, ‘Christ Recrucified’, has been translated into many languages and can be found in the libraries of all western universities but is strictly banned from Cyprus schools because in it Kazantakis vividly described the sinful weaknesses of priests. I will not even discuss ‘The Last Temptation of Christ’, in which, according to an illiterate bishop, “the pen of the filthy anti-Christ ripped open the chest of the Lord.”

The high school graduate does not even know Cyprus’ history and I am not referring only to modern history. School textbooks write that Archbishop Kyprianos was hanged in 1821 for his revolutionary activity, a version of events that has been questioned by all foreign historians. They point out that Kyprianos was executed exclusively for economic reasons by the Turkish army and that he was clearly against a prospective uprising. Even if we relied exclusively on church sources, we would conclude that Kyprianos was a Nenekos, or collaborator with the Turks. In a circular distributed in May 1821, which is recorded in the Archbishopric’s ‘Code A’, Kyprianos urged his flock to refrain from any revolutionary activity and to behave loyally, that is subserviently. The verdict about Kyprianos’ contribution (or anyone else’s) to the Greek Revolution of 1821, therefore, must not be based on the conclusions of the school history textbooks but on a variety of sources that could possibly differ radically from the ‘conventional’ version. Unbiased history does not exist.

Watching the religious television shows we realise how the church reaps the benefits of its absolute domination of education. Journalists have been socialised accordingly and all display an excessive zeal for Orthodoxy. I will not mention the fact that they never invite atheists or agnostics onto their shows. I will however mention the hostility with how they approach Jehovah’s Witnesses. But are they not also our compatriots and an integral part of our society? Why should they be denied the right to explain why they have ‘deviated’ from the ‘correct’ path? Especially given the disproportionate amount of time given to the four Lilliputian parties to air their views on television.

Has playing to media ruined chances of solution?