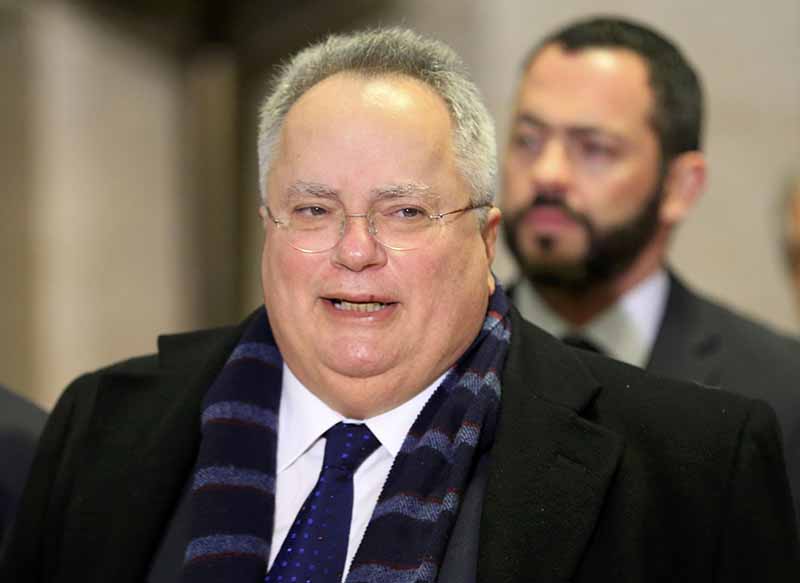 The Conference on Cyprus ended the day it started – at least in terms of level of representation – due to the actions and words of Greek Foreign Minister Nikos Kotzias, the Cyprus Mail has learned.

According to information corroborated by various sources, Kotzias “insulted”, “lectured” and “annoyed” a number of participants at the Conference, convened to discuss security and guarantees in a Cyprus solution, including UN Secretary-General Antonio Guterres.

Kotzias’ behaviour towards Guterres so irritated the new UN chief that he refuses to sit in the same room as the Greek FM for the foreseeable future. This means that if and when the Conference on Cyprus convenes again, it will have to be at the highest level of representation.

Greek Prime Minister Alexis Tsipras was made fully aware of the antics of his foreign minister, as well as Guterres’ position on the matter, while German Chancellor Angela Merkel called the Greek PM to let him know there was a problem.

It is understood Tsipras will now be taking the reins of the Cyprus problem talks from Kotzias and will represent Greece at the next political meeting of the Conference on Cyprus.

The Conference began on Thursday with the intention of getting a political understanding on the framework within which further negotiations on security and guarantees could take place on a technical level, to prepare the ground for a final political agreement.

After everyone made their opening statements on Thursday, the hope was for the political protagonists to begin a genuine discussion on security and guarantees, but not in a narrow sense, which did not permit any conversation since the sides’ respective red lines are diametrically opposite.

The idea was to reframe the debate, and make an effort to understand the context in which these issues exist. One proposal was to establish a working group, representing all participants (including the EU). The group’s task would be to define the key issues involved and prepare relevant questions to help the sides work on finding mutually agreeable solutions.

If one listens to UN Special Adviser Espen Barth Eide’s press conference on Friday, he sets out clearly the framework in which this discussion could take place. Instead of discussing guarantees and security in a strict sense, the sides could look at the federal constitution as a first layer of security. A second could be how to set up the police and judiciary to provide a second layer of “internal” security. Then, to meet the concerns of both sides, some kind of security arrangement would have to be made to ensure implementation of what is agreed. A final layer would deal with the issue of “external” security and how a united federal Cyprus can confront external threats in a volatile region.

The political talks were expected to continue on Friday to set up broad terms of reference for the working group which would be set up the same day. Senior civil servants from all sides would work over the weekend, while the political leaders would be called back to Geneva the following week.

To give the Conference a chance, the delegations made arrangements to stay until Monday if needed, depending on progress. Guterres’ programme for Friday was also left clear.

The British came to Geneva prepared for any eventuality, including the launch of technical talks, with a large delegation of experts, between 35 and 40. Turkey and Greece also brought key Cyprus experts with them.

However, things did not go quite according to plan. President Nicos Anastasiades ended up leaving on Friday while British Foreign Secretary Boris Johnson got a chance to go visit the Large Hadron Collider.

Thursday started with all sides giving their opening positions. Then the working lunch started, during which, according to sources, Kotzias started lecturing, interrupting and criticising other participants. He reminded Guterres that the UN’s only job is to implement UN Security Council resolutions, adding that Cyprus was not an intercommunal problem but a question of invasion and occupation.

Then Guterres had a meeting with all three guarantor powers, followed by bilateral meetings with each of them. The guarantor powers agreed to let senior experts start work on the issue. All except Kotzias were ready for the working group to start immediately. The Greek FM said the Greek side was not prepared for this to happen and asked for a ten-day postponement. He insisted, others pushed back. Guterres told him that the Syria talks would take place on January 23 in Astana, and this was not possible. The idea was to discuss it further with the Cypriot sides in the afternoon.

However, before the afternoon session, Kotzias informed the press that the guarantor powers had decided to set up a working group, which would likely start work on January 23.

Anastasiades heard about it through the press. He was not happy, and questioned how the guarantor powers could decide for the Cypriots without the Cypriots?

It was explained to him that this was not the plan at all, and that Kotzias had gone “off script”. During the afternoon session, the Greek FM reportedly suggested there was a deep anti-Greece sentiment. Because of these perceptions, the session focused more on form and protocol than ideas.

One source said Kotzias burnt a few bridges with his “unhelpful” and “insulting” interventions and insulting behaviour, which ended up surprising his own team, while getting almost everyone against him. The source went so far as to say the Greek FM lives in a world of conspiracy theories.

He did not appear to come for a discussion.

Eventually, the decision was taken for the working group to begin on January 18.

According to one source, in substance, the end-result is almost the same – only five days later than hoped. But the climate, which started well enough, had soured, while the opportunity to do some real work with all the principle players present was missed. It remains to be seen whether the damage done to the Guterres-Kotzias relationship can be repaired.

The next political leaders’ Conference will include Tsipras. This is expected to take place in the next few weeks, if all goes well.

Problems created for Athens and Nicosia