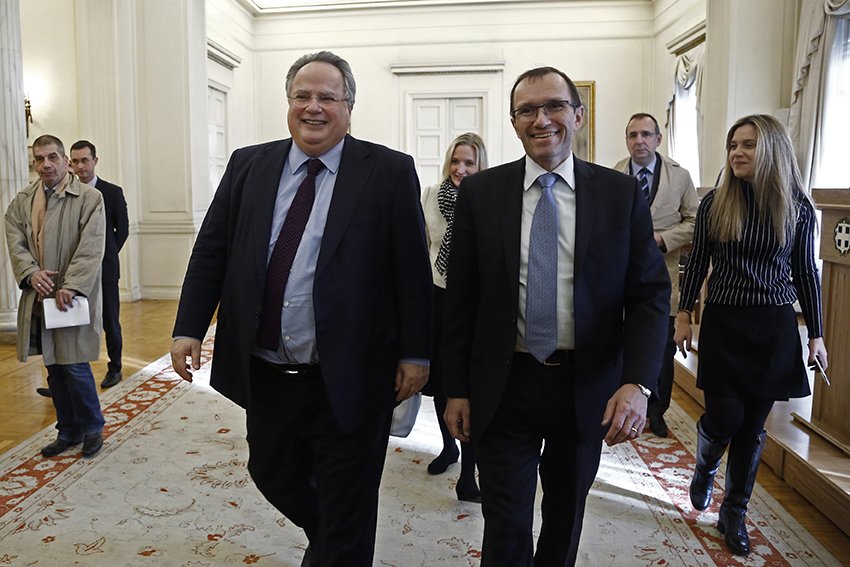 Greek Foreign Minister Nicos Kotzias on Monday dismissed any suggestions that he would not be participating in the next international conference on the Cyprus issue because he had disrupted the previous one in Geneva last Thursday.

Speaking in Brussels following a meeting of the EU foreign affairs council, the Greek diplomat described the allegations as “despicable and paid publications of a dirty press”.

He was referring to reports that various parties, including the United Nations, had complained about his attitude during the Conference on Cyprus on guarantees and security.

“Every time the two sides meet to discuss the Cyprus problem, some people, instead of noting Turkey’s intransigence and the lack of will for a real solution of the Cyprus issue – since it insists on maintaining its guarantor rights – they put the blame on me,” he said. “These are designed to provide an alibi for the unacceptable stance certain sides have in the negotiation.”

It was reported on Sunday that Greek Prime Minister Alexis Tsipras will represent the country in the next conference, possibly later this month.

The Geneva conference had been expected to run for at least a couple of days to give the negotiators a chance to dig into the issue, with the aim of ending with a broad political agreement on how to ensure security once Cyprus is reunified.

Instead, it broke off late on Thursday, after Kotzias unexpectedly announced to the media and to the surprise of the other participants, that discussions would continue but only on a technical level between high-level civil servants from all sides on January 23. This was later brought forward to Wednesday.

The Cyprus Mail’s own sources said Kotzias ‘insulted’, ‘lectured’ and ‘annoyed’ a number of the participants, including UN Secretary-General Antonio Guterres.

But several news outlets on Monday said this may not be the only obstacle in the talks.

In an op-ed published on Monday, Bloomberg suggested that Cyprus was an important place for Russia and reunification “would only benefit Moscow under certain conditions”.

According to the piece, Russia seeks to weaken and divide the North Atlantic Treaty Organisation, “but a settlement could strengthen it by resolving a longstanding conflict between Greece and Turkey – both members.”

Moscow is also trying to forge an energy partnership with Turkey to sell gas to southern Europe, but reunification threatens to clear the way for a competing one, Bloomberg said.

Big natural gas discoveries in the eastern Mediterranean and warming relations between Israel and Turkey made the construction of a pipeline carrying Israeli gas to Turkey a possibility – though the government of Cyprus has linked the pipeline to reunification.

News portal Politico Europe also reported recently that Russia may be trying to undermine the talks.

“A peace deal would ease tensions between the European Union and Turkey, open the way to formal cooperation between the EU and NATO, give Turkey a new source of natural gas imports, and hand Brussels a diplomatic success story after a series of blows last year,” it said, arguing Moscow is trying to avoid these eventualities.

It cited an unnamed source “close to the government of Nicos Anastasiades” as saying that the government is “aware of Russian activities and monitoring the situation”.

“The Cypriot government is wary of Russia because Moscow has caused problems in the past, trying to disrupt the only other chance Cyprus has ever had at reunification — a 2004 referendum on a UN-driven deal,” it noted, referring to the Russian veto, amid 14 votes in favour, on a Security Council resolution on changes that would have taken effect if Cyprus had reunified.

The day before the Security Council vote, Giorgos Iacovou – the foreign minister under Tassos Papadopoulos who vehemently opposed the plan – had been in Moscow, reportedly to ask Russia to veto the resolution.

“Observing from the outside, there are elements that could make one think that maybe Moscow is cultivating other expectations [for the Cyprus talks],” a European diplomat following the talks said, according to Politico.

The article prompted an angry denial by Russian ambassador to the EU Vladimir Chizhov, who claimed that attempts to shift the blame for the failure of the talks are “both unfair and misleading”.

“Anti-Russian hysteria is becoming contagious,” Chizhov wrote. Chishov served as a diplomat in Cyprus in 1985 and then as Russian Special Representative for Cyprus from 1997-2000.

“Overzealous fighters of the (dis)information front are working day and night to implicate Russia in all sorts of problems, including those that are the direct result of shortsighted and arrogant policies of others.”

The diplomat said that Russia’s 2004 technical veto on “an ill-prepared UNSC resolution” was met with thanks from both sides.

Meanwhile, an editorial by pro-government Turkish daily Sabah on Sunday argued that Cyprus problem talks should be put on hold until “the region re-stabilises” and both Greece and Turkey can work with Russia to solve the ageing conflict.

“It is obvious that we cannot reach an agreement at a time when the region is undergoing major changes, the balance of power is rapidly shifting, the Obama administration and the EU leadership do not strike anyone as reliable partners and Greece continues to suffer from economic hardship,” the paper wrote.

“Working more closely with Turkey, Russia is becoming a more prominent player in Eastern Europe. Considering that the EU’s shortsightedness has pushed Bulgaria toward Russia, it’s possible that Greece could be next. There are indeed strong signs that Russian influence over Athens is growing.”

For 40 years, the paper added, Turkey tried and failed to address the Cyprus issue with the West.

“At the very least, Russia deserves a shot,” it concluded.

Our View: The Cyprus Republic has not been downgraded, but political debate certainly has