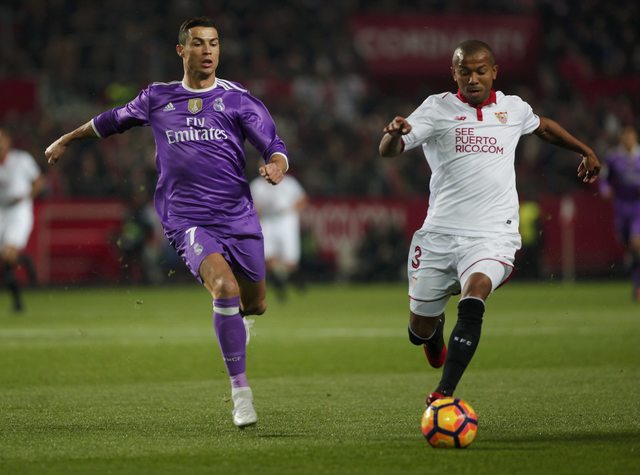 Real looked set to go five points clear of rivals Barcelona at the top when Cristiano Ronaldo scored a record-equalling 56th La Liga penalty to give them the lead in the 67th minute.

But Sevilla drew level five minutes from time thanks to an own goal by their former defender Sergio Ramos, whose every touch had been mercilessly booed by the home fans.

New signing Jovetic then completed the fightback when he bent in a shot from outside the area, three days after scoring against Real on his debut.

Real remain top on 40 points but saw their lead over Sevilla cut to one point, although they have a game in hand over both the Andalusians and Barcelona, who are third on 38.

“The result changes nothing. We played well against a great side and did the hardest thing to do which was to score and then with only a few minutes to go, they caught us out twice,” Real coach Zinedine Zidane said.

“We feel disappointed but I feel very proud of everyone for what we did up until now. We knew we were always going to have a day like this and today is the day but we have to keep working as hard as we have in all competitions.”

The two sides had played out a thrilling 3-3 draw in the King’s Cup on Thursday, with Real fighting back from 3-1 down in the final stages to preserve their record unbeaten run.

Zidane recalled Luka Modric and Ronaldo after resting them on Thursday and employed a 3-5-2 shape for the first time this season, making for a far tighter affair than the whirlwind football both sides had served up three days earlier.

The only chance of note in the first half fell to Ronaldo courtesy of a scrambled pass from Karim Benzema but the Portuguese mis-hit his shot, sending it wide.

Sevilla’s Wissam Ben Yedder burst forward from the right hand side 10 minutes into the second half but lacked the power to beat Real goalkeeper Keylor Navas, while Benzema later fired over in a moment of chaos in the Sevilla area.

A tight game was forced open when Sevilla left back Sergio Escudero misplaced a backpass and Real’s Dani Carvajal raced onto it and into the box, beating a defender and trying to round goalkeeper Sergio Rico before being tripped.

Rico escaped a caution but was powerless to stop Ronaldo’s powerful low spot kick, which took him level with Real great Hugo Sanchez as the top penalty taker in the history of La Liga.

The game was far from over, however. Ramos headed a Pablo Sarabia free kick into his own net, much to the delight of the Sevilla fans he had mocked in the King’s Cup match after scoring a penalty.

The home supporters then had one last laugh when Montenegrin former Manchester City and Inter Milan forward Jovetic let fly from outside the box, sending the ball into the far top corner.

Earlier, Valencia beat Espanyol 2-1 with goals from Martin Montoya and Santi Mina to earn their first league win since October and move four points clear of Sporting Gijon, who lost 3-2 at home to Eibar and occupy the final relegation spot.

After their bottom-of-the-table clash ended 1-1, Osasuna remain at the foot of the league, a point behind Granada.

Juve’s lead at the top cut after defeat at Fiorentina