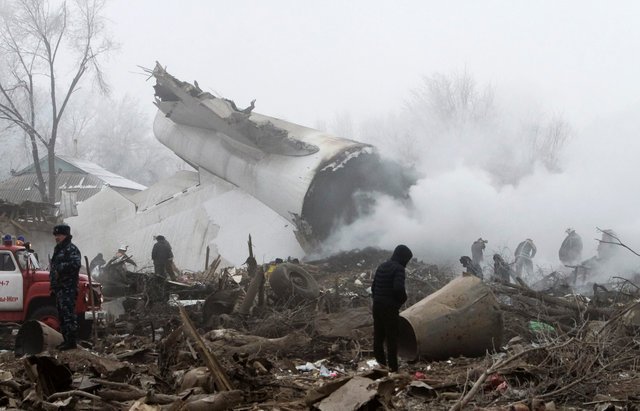 A Turkish cargo jet smashed into a village in Kyrgyzstan on Monday as it tried to land at a nearby airport in dense fog, killing at least 37 people, Kyrgyz officials and the airline said.

According to airport officials, the Boeing 747 was supposed to make a stopover at Manas airport, near the capital Bishkek, on its way from Hong Kong to Istanbul, airport officials said, but it crashed in poor visibility at 7:31 a.m.

The plane ploughed on for a few hundred metres (yards) through the Dachi Suu village, home to hundreds of families, sheering into mangled pieces and damaging dozens of buildings.

Four crew members on board were killed. The rest of the dead were villagers. Kyrgyzstan’s Emergencies Ministry put the initial toll at 37. The Healthcare Ministry said 13 children and teenagers were among the dead.

“I am alone now, all of my neighbours are dead,” said Anarkan Kozhoyeva, 65, a pensioner. “Our house was just 20 metres away (from the destroyed area).”

A area the size of a football pitch was completely levelled and covered with wreckage.

The plane’s tale section was left upside down on top of a shed, next to the empty space where a house had been entirely obliterated.

Plumes of smoke rose above the crash site, with some mudbrick buildings razed to the ground and others pierced by parts of the plane.

Locals said they had initially thought the area was struck by an earthquake.

“Around 7 o’clock in the morning I heard a loud noise and after that all the nearest houses were shaken,” resident Andrei Andreyev said.

“Everyone got frightened and started to run out of the houses to the street. Nobody understood what was going on because there was a fog, the weather was not good.”

Kyrgyz President Almazbek Atambayev announced Tuesday would be a national day of mourning.

Initial reports had suggested the plane was operated by Turkish Airlines but Turkish ACT Airlines said it was flying the Boeing 747-400.

ACT Airlines said two pilots, a loading expert and an aviation expert were killed in the crash.

Kyrgyz officials said representatives of the Interstate Aviation Committee and Turkish authorities would join the crash investigation on Tuesday.

The crew had flown the plane along the same route for the last few months and were familiar with the area, they said.