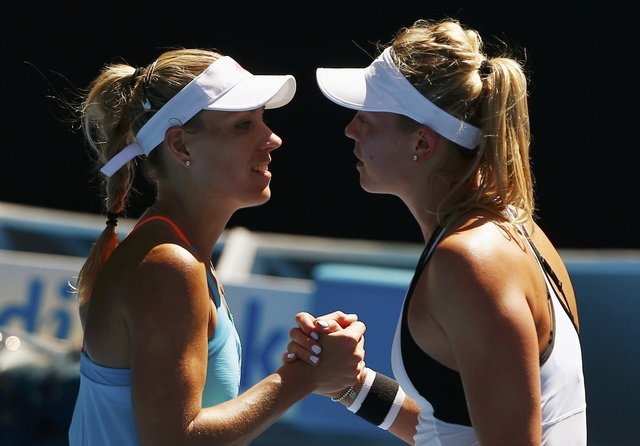 Angelique Kerber celebrated her 29th birthday with a shaky 6-2 6-7(3) 6-2 win over Carina Witthoeft at the Australian Open on Wednesday but the world number one will have much to ponder in her title defence once the candles are blown out.

The top seed opened nervously in a three-set grind with unseeded Ukrainian Lesia Tsurenko on Monday and again suffered a meltdown when well on top of 89th-ranked Witthoeft at a breezy Rod Laver Arena.

German Kerber squandered a 2-0 lead as she headed for victory in the second set, then shipped 10 successive points to lose the tiebreak and then her serve in the first game of the deciding set.

But the plucky 21-year-old Witthoeft, who had swung hard at every ball to rattle the champion, suddenly fell away, allowing Kerber to rally and close out the 128-minute tussle.

“I’m trying … to play more aggressive. But today I was doing a few more mistakes,” said Kerber, who next plays another left-hander in 58th-ranked Czech Kristyna Pliskova, the twin sister of U.S. Open finalist Karolina.

“I was not finding my rhythm from the first ball,” she added. “At the end I won, and this is all that counts for me.”

As against Tsurenko, Kerber wrapped up the first set quickly but was knocked off her stride by the free-swinging Witthoeft, who began finding the lines after a wayward start.

It may have been Kerber’s special day but she handed out all the presents after taking a 3-1 lead in the tiebreak.

She double-faulted twice to allow Witthoeft to nose ahead 4-3 and sprayed a backhand wide to give up three set points.

Desperate and stranded mid-court, Kerber netted a backhand to lose the set and returned to her seat, only to be stunned once more in losing her serve to love.

The Kerber who upset Serena Williams in a classic final on the same court last year was replaced by her old self before her breakout 2016 – the top 10 player who lacked the mental strength to trouble the best players at the majors.

Luckily for the twice grand slam champion, her opponent’s belief wavered and her baseline rockets began firing long and wide.

Witthoeft crumbled to trail 4-1 and Kerber closed out an unconvincing win when her opponent slapped a forehand wide on match point, her 69th unforced error.

Kerber would head for a “nice dinner” with her team but not before trying to find her game on the practice court, she said.

“It’s again, like tournament rhythm and I will just practice once … just maybe 45 minutes or 60 minutes. Just have the rhythm back, and that’s it,” she added.

BoC board likely to discuss Ross’s departure on Tuesday