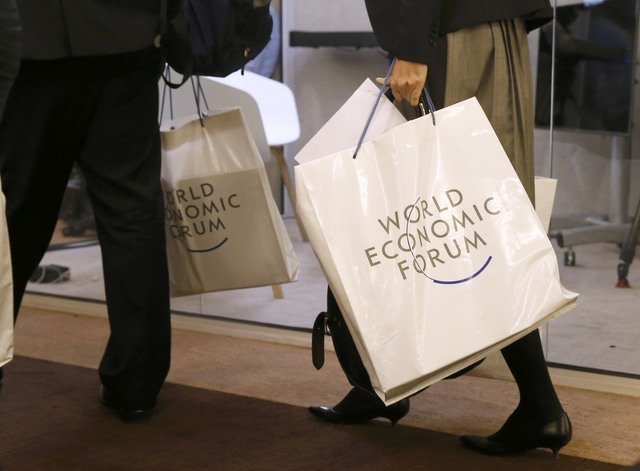 Attendees walk in the Congress Hall during the annual meeting of the World Economic Forum (WEF) in Davos, Switzerland

“I CAN’T wait to see how the incoming administration deals with AI (artificial intelligence),” said US Secretary of State John Kerry, in a less-than-gracious reference to the fact that the Trump team hasn’t got a clue about the real driving force in the changing world economy.

What was striking was that Kerry didn’t have to clarify his remark for the 2,000 “global leaders” – politicians, bureaucrats, business representatives and public intellectuals – who are in the Swiss alpine town of Davos for the annual World Economic Forum (WEF). They all know what he’s talking about.

This year’s Davos gathering is actually focused on the rise of populism and simple-minded attacks on globalisation (Donald Trump, Brexit et al.). That’s only to be expected, since the world’s ultra-rich are potentially threatened by that sort of thing. But they didn’t get rich by being stupid, and they have a fairly sophisticated analysis of what’s causing it.

The headline event on the first day of Davos was an hour-long speech by China’s President Xi Jinping in which he laid claim to the leadership role on free trade, globalisation and the struggle to contain climate change that is being abandoned by the United States under Trump. His main concern was to fight the rise of protectionism: “No one will emerge as a winner in a trade war,” he said.

But Xi didn’t go into the sources of the anger that fuels the populist revolt (for China is not a democratic country, and it hasn’t happened there yet). John Kerry did get into it, and he went well beyond the usual platitudes about rising unemployment and under-employment, stagnating wages, and the widening gulf between the rich and the rest.  “Trade is not to blame for job losses,” he said. Automation is.

Quite a few American manufacturing jobs did go abroad in the early stages of globalisation, in the 1980s and 1990s, but that’s old news. Eighty-five percent of the almost 6 million American manufacturing jobs that disappeared between 2000 and 2010 did not go anywhere; they just evaporated. The workers were replaced by tireless, uncomplaining machines that could do their jobs more cheaply.

Although Kerry did not mention it, the same thing is now happening in China: relatively cheap Chinese labour is still more expensive than the automation that replaces it. Even in India, where wages are lower still, there is now talk of “premature deindustrialisation”.

It’s a misleading phrase, because it suggests that India will never become fully industrialised. It probably will – but perhaps without ever creating a huge industrial working class with reasonably good and steady wages. Further industrial growth is likely to come mainly through automation, and employment in manufacturing may be peaking right now.

So Donald Trump is barking up the wrong tree, as are the other populists emerging all across Europe, and their emulators who are beginning to appear in the developing world. Why do they all persist in blaming free trade and globalisation instead of automation?  Because you can’t do anything about automation.

It’s like the old story about the man looking for his car-keys under the street-light. “Where did you lose them?” “Over there.” “Then why are you looking for them here?” “The light’s better here.”

If you are a politician, then it’s better to blame globalisation because you can do something about that. You can build walls, impose tariffs, make all sorts of impressive gestures to stop the free trade that is allegedly destroying the good jobs. Or more precisely, you can win political power by claiming that you will do those things and thereby solve the problem.

Whereas nobody will believe you if you say that automation is what is really changing the economy, and so you are going to stop the automation. That’s Luddism, and everybody (or at least, everybody at Davos) knows that that doesn’t work. So the rich and the powerful are way out ahead of the pack in accepting that growing automation really is going to destroy large numbers of jobs.

A recent Citibank research note forecasts that automation will eliminate 57 percent of all existing jobs in the developed countries within the next 20 years. In China, 77 percent of manufacturing jobs are at risk over the same period. And the notion that the economy will create other, better jobs to replace them is just a comforting myth. Most of the new jobs that are being created are MacJobs.

If more than half the workforce ends up unemployed – and therefore humiliated and broke – then their anger will be so great that it could sweep away the comfortable world of the ultra-rich. Which is why there are sessions at Davos this year considering radical ideas like a “Universal Basic Income”.

To stop the populism, first you have to deal with the anger.

Our View: Technocrats should be able to get some work done in Mont Pelerin

Beyond the 5+1 informal meeting on Cyprus: