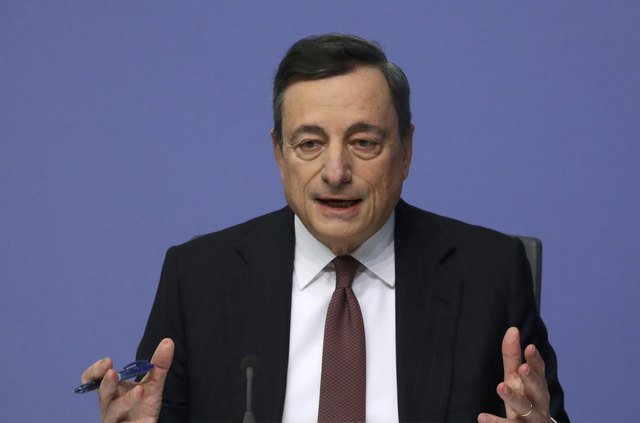 The European Central Bank kept its super-easy monetary policy unchanged as expected on Thursday and its president, Mario Draghi, told critics of his stimulus path to be patient and wait for the eurozone’s recovery to take firm hold.

With growth slowly picking up pace, the ECB kept its various rates at next to nothing or even negative and asset buys at a record pace. It reaffirmed that rates would stay at their current or lower levels for an extended period and that it was also ready to increase or extend it bond purchases if the outlook worsens.

“Economic growth in the euro area is expected to be dampened by the sluggish pace of structural reform,” ECB President Mario Draghi told a news conference, insisting a “very substantial degree” of monetary policy stimulus was still required.

“Be patient — as the recovery firms up, real rates will go up,” he added in a remark aimed at critics, notably in Germany, who say the ECB’s policies have eroded the wealth of savers and allowed weaker economies to get away without real reform.

The euro fell to a day low of $1.0607 after Draghi said underlying inflationary pressures remained subdued and that, once the base effect of rising oil prices had been accounted for, there were still no real signs of a upward trend.

While Draghi warned that global risks to the eurozone economy were still slanted to the downside, he said it was too early to assess what impact Britain’s planned exit from the European Union and its single market would have.

The recovery still relies heavily on ECB stimulus and markets could become more volatile as the Federal Reserve gradually raises rates, underscoring diverging policy paths between Europe and the US

That said, inflation hit a three year high last month, manufacturing activity is accelerating and confidence indicators are firming, all pointing to solid growth at the end of last year.

Indeed, eurozone business growth was the fastest in more than five years in December, order books are surging on export demand, and consumption is holding up, despite rising energy costs, all pointing to the sort of resilience not seen since before the bloc’s debt crisis.

But the underlying picture is mixed.

Inflation is still just half of the bank’s 2 per cent target and the jump is mostly down to higher oil prices.

The market euphoria after Donald Trump’s surprising US election win is also yet to be backed up concrete policy action and the threat of more protectionist policies from the United States and possibly Britain could reverse market sentiment.

The ECB last month agreed to cut its asset buys by a quarter from April but extended the €2.3tn scheme, known as quantitative easing, until the end of the year, promising substantial accommodation and extended market presence.

The extension threatens to reignite tensions between the bank and Berlin, particularly as Germany heads towards an election in the fall and with Finance Minister Wolfgang Schaeuble often pointing the finger at the ECB for problems.

Indeed, with German inflation rates above the eurozone average and government bond yields in negative territory across much of the yield curve, real rates are negative for many savers, pushing some voters towards the rightist Alternative for Germany party.

Cyprus gets EBRD and EU financing for natural gas

Haftar warns Erdogan out of Libya