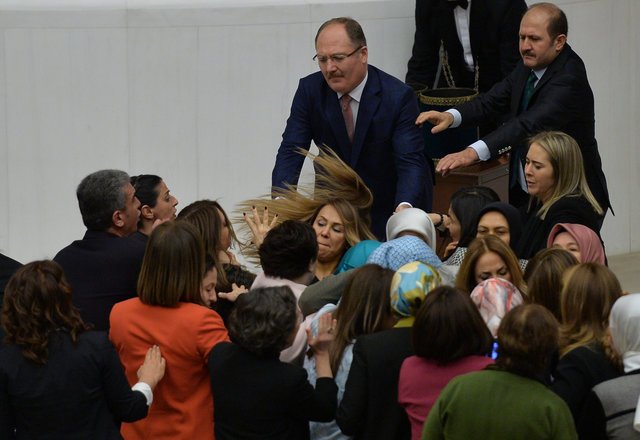 Turkey moved closer to adopting a new constitutional bill extending President Tayyip Erdogan’s powers that supporters welcome as a guarantor of stability at a time of turmoil and opponents see as a step towards an authoritarian state.

Parliament ratified the first seven of 18 articles in a second round of voting, putting the assembly on track to approve the package as a whole by Friday night.

Under the new system, Erdogan could rule in the Nato-member and European Union candidate country until 2029.

As debate on the reforms went late into the evening, an independent lawmaker, Aylin Nazliaka, handcuffed herself to the podium in protest against the stronger presidency.

A lawmaker from the ruling AK Party attempted to end the protest by force and deputies from other parties then weighed in, one losing her prosthetic arm in the fracas, witnesses said.

The AK Party, backed by the nationalist MHP, says it will bring the strong leadership needed to prevent a return to the fragile coalition governments of the past. It would also, they say, help Turkey tackle attacks by Kurdish insurgents and Islamic State militants spilling over from war in Syria.

Prime Minister Binali Yildirim was cited as telling Turkey’s Fox TV: “In the presidential period, when ministers will be appointed from outside, people from and close to the MHP could be appointed as ministers.”

Erdogan assumed the presidency, a largely ceremonial position, in 2014 after over a decade as prime minister. Since then, pushing his powers to the limit, he has continued to dominate politics by dint of his personal popularity.

Critics accuse him of increasing authoritarianism with the arrests and dismissal of tens of thousands of judges, police, military officers, journalists and academics since a failed military coup in July. Erdogan points to a danger from Islamic State militants and Kurdish insurgents.

The seven articles approved lower the minimum age to be a lawmaker to 18 from 25, raise the number of MPs to 600 from 550 and will result in parliamentary and presidential elections being held together every five years.

The seventh article opens the way for the president to be a member of a political party.

The bill needs the support of at least 330 deputies in the assembly to go to a referendum. The AKP has 316 deputies eligible to vote and the MHP 39. So far, articles have generally been approved with at least 340 votes in favour.

A study by Istanbul’s Kadir Has University showed the presidency was rated as Turkey’s most trusted institution, outstripping the army, which normally tops such surveys but whose popularity has fallen after a failed coup in July.

Ready for Day One: Trump poised to take executive actions

Green transition slowed by economic and social barriers, not technology