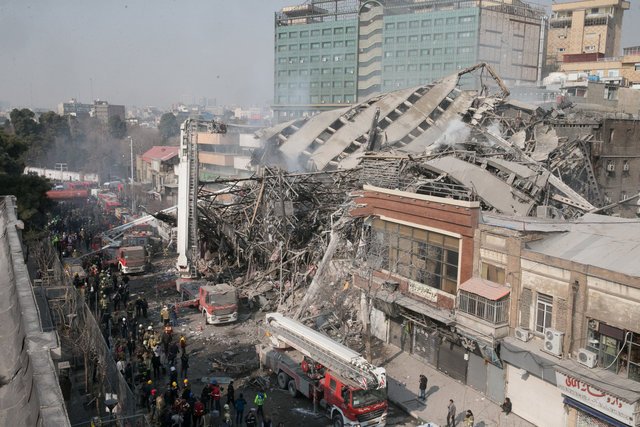 A collapsed building is seen in Tehran, Iran January 19, 2017

Iranian officials said on Friday that 25 people were still unaccounted for after the collapse of a 17-storey commercial building in Tehran on Thursday, in addition to 20 firefighters who were killed in the disaster, state TV reported.

Iranian media carried photos of weeping relatives and dozens of people lined up to donate blood. The government declared Saturday a day of national mourning.

“Police have received missing reports of 25 people. We urge people to report if any of their family members that worked in the Plasco building is missing,” a police official told TV.

Thick smoke and fire were hampering the search for the bodies of at least 20 firefighters under the rubble more than a day after the blaze began, TV reported.

Twenty firemen were killed as they evacuated people on Thursday from Iran’s oldest high-rise building, built in 1962, which housed hundreds of clothing warehouses as well as a shopping mall and other businesses.

“Our aim is to recover the bodies of these martyrs without causing any damage to their bodies,” head of Tehran’s crisis management center Esmail Najjar told TV.

“We are dealing with fire, thick smoke and lack of oxygen.”

Round-the-clock TV coverage showed dozens of firefighters and soldiers cutting through metal girders and concrete blocks to try to retrieve the bodies, and police trying to stop people getting into the building to retrieve valuables.

“These firefighters prevented a disaster. Hundreds of people could have been killed if they had not returned to the building,” Tehran Fire Department spokesman Jalal Maleki said.

“The chance of rescuing anyone alive is almost zero.”

About 88 people, including firefighters, were injured when the Plasco building caught fire and collapsed. Only three were still in hospital, state TV reported.

Iran’s Supreme Leader Ayatollah Ali Khamenei visited one of the firefighters in hospital and President Hassan Rouhani has ordered an immediate investigation.

Authorities said an initial estimate of the financial damage was about $500 million, and that most of the shops and businesses were not insured because safety standards had not been met.