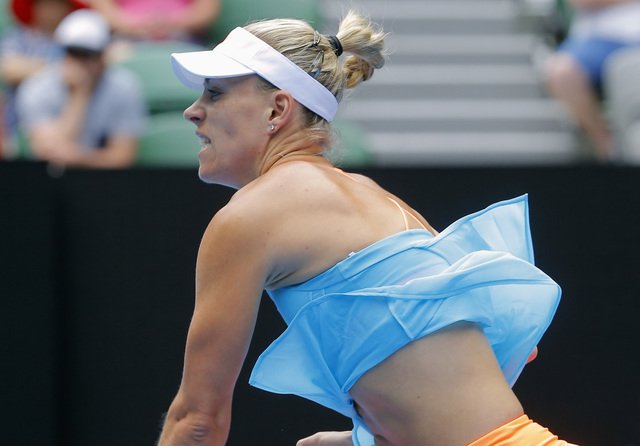 Reigning champion Angelique Kerber said she was finally finding her rhythm at the Australian Open after racing into the fourth round with a 6-0 6-4 victory over Kristyna Pliskova in less than an hour on Friday.

The world number one had taken three sets to win the first two matches of her title defence at Melbourne Park but, two days after her 29th birthday, set an ominous pace by rattling through the first stanza in 20 minutes.

The German had served poorly in the first set and a minor wobble followed in the second but she recovered her composure to progress comfortably to a meeting with American Coco Vandeweghe.

“It’s great to have another good match under my belt and to be in the fourth round again here,” the top seed told reporters.

“It’s great. I’m looking forward to the next one. Yeah, I think that I’m finding my rhythm in the tournament now.”

Pliskova, the twin of U.S. Open finalist Karolina, finally got on the scoreboard when she held serve in the ninth game of the contest and then immediately broke when Kerber badly miscued a backhand at the net.

Kerber was getting her first serve in more reliably now, however, and broke for 5-4 when her fellow left-hander ripped a backhand into the next and went wide with a forehand.

Serving for the win, Kerber found a big forehand winner and dinked a simple volley over the net to bring up match point, which she converted when the world number 58 overcooked a forehand.

“I was feeling very good from the first point but of course matches like this are always tough to play against opponents,” Kerber added.

“They are serving very well, and you have to bring a lot of balls back, move well, and just go for it.

“But I’m happy about my performance.”

The stunning second round exit of men’s champion Novak Djokovic the previous evening on the same Rod Laver Arena had eloquently made the point that no tennis player is inviolable to upset.

While Kerber cannot claim nearly the same sort of pedigree at Melbourne Park as the six-times champion Serbian, she does know her way around a grand slam tournament and felt the challenges of the first week would be helpful.

“I think it was a little bit up and down, the first week,” the U.S. Open champion added.

“All matches are different for me. But I think it’s good to have different matches and going through to that, to being, then, the second round.

“Let’s see what’s the next challenge.”