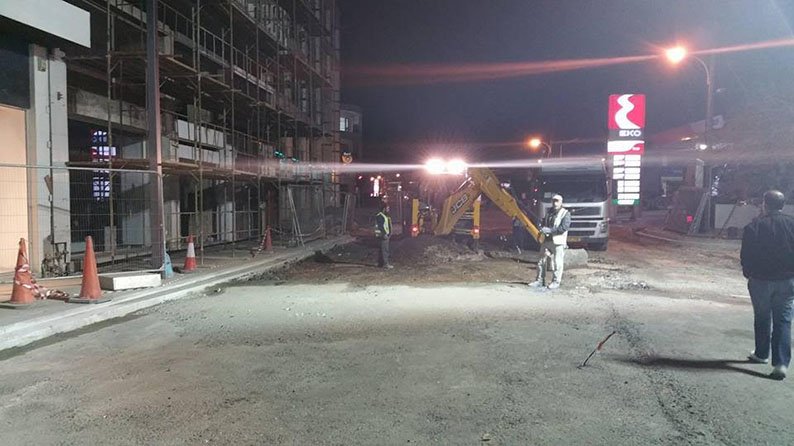 EFFORTS to finish on going infrastructure works in Paphos have intensified with staff working day and night to make up time lost due to recent bad weather.

Night crews are working to finish roads and much of the work in the town- including the square, has been completed with granite slabs laid and trees planted.

He asked for people to be patient and said: “Contractors are working intensively in an attempt to catch up because of the rains and other problems that have arisen.”

Phedonas noted that it was possible to complete projects in a six-month timeframe and not a six year period, which has been the case until now.

He said the modernisation and improvements to the town’s infrastructure would boost its image and ensure that Paphos was a competitive tourist destination and location to attract investment.

A spokesman for the municipality said that roads and other infrastructure would be completed next week, ahead of the official ceremony for Paphos’ cultural capital of Europe title on January 28.

However, business owners in the area said they are concerned that a lack of parking and a general lack of access to the area has seen custom all but dry up.

Argyris Alexandreou, who has owned and run Aphrodite Jeweller’s in Paphos since 1992, said he had expected business to have picked up by now. His shop sits on Makarios Avenue, which is closed to traffic  and is being pedestrianised as part of the ongoing works.

“There is nowhere for people to park it’s even difficult for me to find somewhere early in the morning,” he said.

He added that the main parking area has been left unfinished since the middle of December. He noted that it would have been pertinent to finish this area in a timely fashion, so that shoppers and visitors to the area would have somewhere to park.

“The cark park which is quite large is all done except for the five-metre or so piece of land at the entrance. It has been like this for weeks and it’s a shame. There is only a small piece left to complete and it makes no sense.”

However, he said that the granite paving, a material which is being laid over great swathes of the town as the entire area is being pedestrianised – outside his shop on Makarios Avenue has been completed with only grouting left to do.

“It does look nice, but many people believe the town is closed and we are not. We need to get the word out there that we are open for business. Please come and support us,” he appealed.

The businessman added that 50 shopkeepers from Makarios Avenue have joined force to appeal against municipal taxes which he said were charged at the full rate. However, instead of agreeing to a collective cut, the municipality has said it will judge each case individually, he said.

“They have acknowledged a fifty per cent reduction in refuse collection so I hope that they apply this to business tax and other taxes as well.”

No timeframe for resumption of Cyprus conference