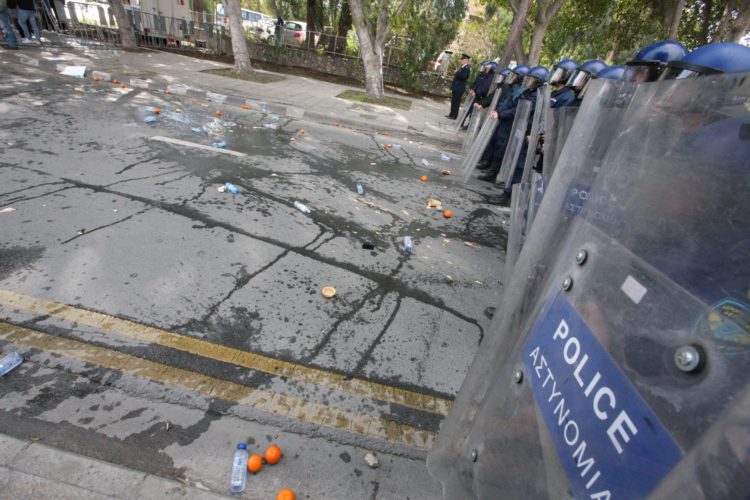 Pupils hurled missiles at police officers and journalists outside parliament where they assembled to protest against new regulations.

Despite appeals from their union, pupils threw stones, flares, sticks, water bottles, sandwiches, and anything else they could get their hands on. A photographer was slightly injured on the arm.

Psem said the protest, attended by hundreds of pupils, was held to express their discontent over the new regulations being discussed by parliament on Friday, especially the introduction of exams at the end of each semester, their major grievance.

The troublemakers were reprimanded by their fellow students who were shouting at them that their aim was to protest peacefully and not cause trouble.

The protest ended at 11am.

Psem condemned the trouble but blamed the authorities for it. The blame lies with “those who deployed riot police platoons, as if pupils are common criminals”.

It added that officers were provoking students by making “inappropriate hand gestures”.

A police announcement later in the evening condemned the policeman’s behaviour, describing it as unacceptable and reprehensible.

Police chief Zacharias Chrysostomou gave instructions for criminal and disciplinary investigations to be carried out and the officer involved was suspended.

His ministry, Kadis said, supports the proposed regulations that were based on scientific evidence and their aim was to “provide students with the best education and upgrade the educational system”.

The minister said an exhaustive six-month dialogue took place in which all stakeholders participated, including pupils.

Kadis said all other stakeholders agreed with the proposed changes, except Akel and Psem. Organised parents “have some reservations,” he said.

Psem, he said had expressed its positions on the new regulations during the discussion period, Kadis said, and “were heard loud and clear”.

All those pupils who attended the protest will receive absences.

The head of Psem, Zafiris Demetriou, said that around 2,000 students abstained from classes across the island, to put pressure on the House education committee and the education ministry to reconsider the proposal concerning the introduction of exams at the end of each semester. Commenting on the fact that of the 2,000 a mere 300 showed up, he said “sadly this is usually the case but what’s important is that we sent out a message”.

“We tried in the past to enter into a dialogue with them (ministry, MPs) but it turned out they are not taking us into consideration. We hope that with today’s protest we will make society and the government listen to us and understand that pupils are against this,” Demetriou told the Cyprus Mail.

He added that exams at the end of each semester, would increase stress, especially on the seniors, as they would have to take exams each semester and also prepare for their finals.

This, he said, will not give time to seniors to properly prepare for the final exams whose results are also taken into account for university entrance.

A survey carried out by Psem in November among 13,500 pupils showed that the majority objects to the introduction of exams at the end of each semester.

The education ministry dismissed the survey, saying its findings were not valid as some of the questions were pointless, while others were phrased in a misleading manner.

Pupils also disagree with the reduction of the number of absences allowed per academic year, and the ministry’s intention to re-introduce the school uniform.

At the moment, uniform regulations are more relaxed, and each school has its own rules, allowing alternative pieces of clothing — usually grey, black or dark blue.