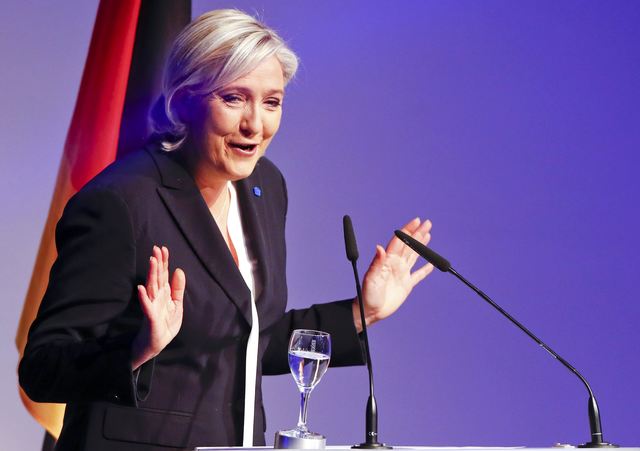 Le Pen told several hundred supporters in the German city of Koblenz that Britons’ vote last year to leave the European Union would set in train a “domino effect”.

“2016 was the year the Anglo-Saxon world woke up. I am sure 2017 will be the year the people of continental Europe wake up,” she said to loud applause on Saturday.

Le Pen, head of the anti-EU, anti-immigrant National Front (FN) and seen by pollsters as highly likely to make a two-person runoff vote for the French presidency in May, has marked out Europe as a major plank in her programme.

The far-right leaders met under the slogan “Freedom for Europe” with the aim of strengthening ties between their parties, whose nationalist tendencies have hampered close collaboration in the past.

“The key factor that is going to set in course all the dominos of Europe is Brexit. A sovereign people chose … to decide its destiny itself,” Le Pen said.

“The second coup did not come long after: the election of Mr Trump to the presidency of the United States … his position on Europe is clear: he does not support a system of oppression of peoples,” she added.

In a joint interview with the Times of London and the German newspaper Bild published on Monday, Trump said the EU had become “a vehicle for Germany” and predicted that more EU member states would vote to leave the bloc as Britain did last June.

Populist anti-immigration parties are on the rise across Europe as high unemployment and austerity, the arrival of record numbers of refugees and militant attacks in France, Belgium and Germany feed voter disillusionment with traditional parties.

The mood is mirrored in the United States, where Trump was inaugurated as U.S. president on Friday.

Several leading German media have been barred from the Koblenz meeting, which is being organised by the Europe of Nations and Freedom (ENF), the smallest group in the European Parliament, in a year when the parties are hoping for electoral breakthroughs.

Also at the meeting were Geert Wilders, leader of the Dutch far-right Freedom Party (PVV) who was last month convicted of discrimination against Moroccans, and Matteo Salvini of the Northern League who wants to take Italy out of the euro.

In the Netherlands, Wilders is leading in all major polls before national parliamentary elections on March 15. Again hailing Trump’s election, Wilders told the meeting: “Yesterday a free America, today Koblenz, and tomorrow a new Europe.”

Protesters demonstrated outside the venue, with Sigmar Gabriel, the leader of Germany’s Social Democrats, junior partner in Chancellor Angela Merkel’s ruling coalition, due to join the protest. (