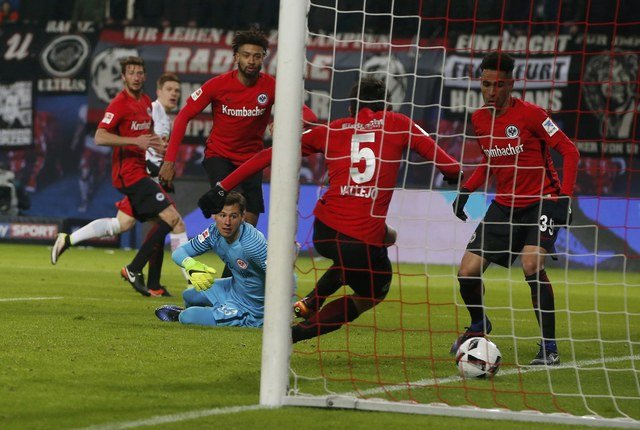 Second-placed RB Leipzig brushed aside Eintracht Frankfurt 3-0 in the Bundesliga on Saturday after opposing goalkeeper Lukas Hradecky was sent off after just three minutes.

Hradecky was one of two goalkeepers to be dismissed in the first half of Saturday’s games after Werder Bremen’s Jaroslav Droby was given his marching orders in his side’s 2-1 home defeat by Borussia Dortmund.

Hoffenheim, the only team still unbeaten this season in any of Europe’s big five leagues, continued their run with a 2-0 win at Augsburg.

Leipzig’s win took the Bundesliga debutants on to 39 points, three behind leaders Bayern Munich who won 2-1 at Freiburg on Friday as the league resumed after a month-long winter break.

Hoffenheim, who have won seven and drawn 10 of their 17 games, are third with 31 points followed by Dortmund in fourth.

Leipzig, beaten 3-0 by Bayern just before Christmas, were quickly back in their stride after Hradecky was dismissed for handling the ball outside his area.

Heinz Lindner took the Finnish international’s place in goal as he made his Bundesliga debut. The Austrian immediately saved the resulting free kick with his first touch but was powerless as Marvin Compper scored from the rebound.

Midfielder Naby Keita was again in majestic form for Leipzig as he set up their other two goals.

The Guinea international’s perfectly-delivered free kick allowed Timo Werner to head home in first half stoppage-time and his shot also led to a goalmouth scramble which ended with Jesus Vallejo turning the ball into his own net in the 67th minute.

Sandro Wagner broke through for Hoffenheim two minutes after halftime when he bundled home from Nediem Amiri’s pass for his 10th goal of the season and Andrej Kramaric tapped home in the 64th minute after Mark Uth spring the offside trap.

Dortmund made heavy weather of beating 10-man Bremen despite taking a fifth minute lead with Andre Schuerrle’s first league goal for the club.

Bremen keeper Drobny was sent off in the 39th minute for a lunging tackle on Marco Reus outside his area, yet the hosts kept going and managed to equalise through Fin Bartels just before the hour.

Lukasz Piszczek saved Dortmund’s blushes when he turned in Raphael Guerreiro’s cross after Bremen failed to deal with a corner.

VfL Wolfsburg needed an 83rd minute goal from Mario Gomez to beat lowly 10-man Hamburg SV 1-0 after the visitors had midfielder Albin Ekdal sent off for a second bookable offence in the 33rd minute.

Hamburg, the only ever-present club in the Bundesliga’s 54-year history, remained in 16th place, the relegation playoff spot.

Schalke 04 left it even later as Guido Burgstaller, making his debut after his move from second tier Nuremberg, scored in the 90th minute to give them a 1-0 win over relegation candidates Ingolstadt.

Basement side Darmstadt and Borussia Moenchengladbach drew 0-0 in the other game.